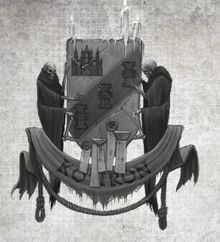 It was the morning of her first meeting with her husband-to-be and D'onne was as tense as a strung bow. Sleep had been elusive and she had spent much of the night studying the hereditary rolls of House Ko'iron. They revealed a house that was not exactly the brightest star in the Necromundan firmament.[3]

House Ko'iron (sometimes spelled Ko'Iron) is one of the seven Noble Houses of Necromunda's Hive Primus. House Ko'iron has strong ties to the Ecclesiarchy and House Cawdor, emerging as a powerful sub-faction within the latter's ruling hierarchy.[7]

Ko'iron has a powerful female line, and in contrast to the other Patriarchal Noble Houses is led by a series of Matriarchs descended from the maternal line. Far from the most powerful Noble House, it maintains its position in the Spire from the ownership of several ramshackle Hive City manufactoria districts and a few choice off-world charters. Possibly as a result, many well-known Ko’irons are famous outside the House only for their political marriages to other Houses, and it is fitting that a gambling game is named after it: Ko’iron Six Card.[1][2][3][4][5][6]

The devout matriarchs of the Noble House have always enjoyed close ties with the Ecclesiarchy on Necromunda, and dominate the upper levels of Hive Temenos. There are even rumors that the House was founded around the same time as the Adepta Sororitas and somehow the two are linked. Certainly the noble women of Ko’iron enjoy the confidence of the Sororitas mission on Necromunda, and many of their daughters end up joining the ranks of the Battle Sisters. With such close associations to the Imperial Creed, it is little wonder that Clan Cawdor has found a sponsor in House Ko’iron. In return for their devotion and their manpower, the pious matriarchs provide the Clan House with genuine holy objects drawn from the stores of the Ecclesiarchy, such as blessed battlefield relics like the bloodstained armor of martyrs, or incense made from the ground bones of missionaries.[7]

Nearly ten years ago House Delaque lost the lucrative Ko'iron Contract, severed all contact with the noble house on the sundering of this ancient deal and effectively stranding their agent Krelyn Delaque who had taken an oath to serve the Noble House while the Delaque-Ko'iron Contract was in effect.[2]