House Krast are a Knight House of the Imperium located on Chrysis.

House Krast was the first of outer Knight Houses that declared their allegiance with the Imperium - it happened at the start of the Great Crusade in 850.M30.[4]

The proximity of Chrysis to Mars meant that the knightly houses of Chrysis were able to swiftly resupply their Knights with new weapons and equipment. Foremost amongst these knightly houses was Krast, and their strength at arms was bolstered further still by their new alliance with the Mechanicum. Gladly did the full might of House Krast set forth at the bidding of Mars to fight in the Emperor’s wars, leaving the lesser houses to consolidate the alliance with the Mechanicum on Chrysis. However, the Knight world’s proximity to Mars was to ultimately prove its undoing when the full might of Horus’ traitor forces descended upon Chrysis as he carved a bloody path across the galaxy towards Terra. The Knights of House Krast returned to their planet only to find it devastated and the lesser houses all but erased from existence. Ever since the Horus Heresy, the Knights of House Krast have vowed that whenever the threat of Chaos rears its malformed head, they will be there to sever it at the neck.[1b]

Of the bitter betrayals that led to the destruction of all but one of the knightly houses on Chrysis, House Krast holds the base treachery of Legio Mortis to be the worst. As one of Mars’ own Titan Legions, the Death’s Heads fought alongside the Knights of House Krast on many occasions during the early years of the Great Crusade. However, after siding with Horus during the ensuing civil war, the Death’s Heads were reborn in the image of the plague god Nurgle, and led the assault that devastated Chrysis and annihilated the planet’s lesser houses.[1a]

The Knights of House Krast have ever sought to avenge their fallen kinsmen, and seek out the Titans of Legio Mortis above all others in battle. Should a Knight claim a Titan kill, his deed will herald many celebrations on his return to his home world. However, such revelry will pale in comparison to that on Chrysis should a Knight of Krast fell one of the Legio Mortis. The Noble will be treated to a triumph in his honour and he will henceforth be known as a Headtaker. Each Headtaker bears a broken Death’s Head symbol on his Knight suit or tabard – a battle honour reminding all of his heroic deed and celebrating the destruction of a hated foe.[1a]

Rumoured sightings of the traitor Titans of Legio Mortis amongst the Chaos forces besieging the Cadian Gate has led to House Krast redeploying to that war zone in great force.[1a] 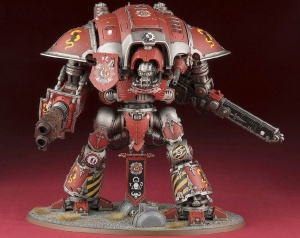