A metal gauntlet clutching an iron chain: the symbol of House Orlock[Needs Citation]
House Orlock, known as the House of Iron[3a], is one of the six families who make their home in the "Hive City" part of Hive Primus, the capital of Necromunda.[1]

The Orlocks, as house members are commonly known, are responsible for the production of the majority of the iron in Hive Primus, which has led to the house earning the sobriquet of "House of Iron". House Orlock also holds a monopoly of the convoys serving Ash Wastes slag-heaps.[1] Of all the clans, House Orlock has the largest influence over the Ash Wastes between the Hives.[3a] Besides their mining, House Orlock also oversees Wild Snake alcohol distilleries.[3a]

The Orlocks have a longstanding rivalry with the mysterious House Delaque, due to the Orlocks sabotaging a Delaque factory, which led to the Delaques losing a very lucrative business contract with the noble house Ulanti. When the Orlocks got the contract instead, things only escalated, and the Delaques retaliated by assassinating Lord Hagan Orlock. The chances of either house burying the hatchet is infinitesimally small.[Needs Citation]

The history of House Orlock beings in M38 among the Ash Waste Nomads. One, Olandus Orlock, was considered prosperous by the standards of the duster clans. In 003.M38 Olandus and his family were caught in a particularly bad duststorm and took shelter in an ancient wreck to escape. This was revealed to be an ancient vessel, which Olandus scavenged for archeotech over the coming years, quietly amassing wealth. The House grew in power and inside his ancient wreck Olandus was able to threaten minor Clans such as Kamund, Cinderjack, and Merdena into allying with him and waging war against the more powerful House Orlund.[3a]

For decades in the wastes the two houses engaged in a road war that saw raiding attacks and theft of goods by both sides. Eventually more powerful Houses such as House Vosak and House Eschaki sided against Orlund and allied with the Orlocks. In 111.M38 Kaylana Orlund, youngest daughter of Vetrix Orlund, secretly proposed marriage to Olandus' eldest son Kavar Orlock. They were secretly wed and, heartbroken by the betrayal, Vetrix wandered off into the Wastes. Kavar and Kaylana became the first family of the newly-ratified House of Iron.[3a]

House Orlock continued to grow in power over the centuries. However by the end of the 38th Millennium they had grown weak and complacent due to their status. In early M39 the combination of crushing production quotas, excess, and unreliable security forces came to a head when a work crew in one of the Bighole oliff mines launched a revolt. The Drudge's actions were the spark that set the Bighole rebellion alight. The Orlocks assembled a massive army of mercenaries, but the rebels had acquired the wealth of bighole and were able to outbid the army. The rebellion quickly spread across the spoil and other Houses took advantage of Orlock's weakness. The Uprising proved a chance for hardliners nostalgic for the days of the House being led by hardened prospectors to make their move. These claimed themselves the true successors to the Orlock and allied families, making deals with the strongest rebel leaders. This would become known as the Crucible Schism.[3a]

A third faction soon emerged in the Schism when Avor Orlock, the young founder of a wasteland settlement, turned rebels to his cause with the creed 'Gang Before House, House before the rest'. This became known as the "Code of Iron" and with the help of the young Rei Merdena, rebel daughter of the patriarch of the Merdena Family, the rebellion was put down by its own leaders. Avor became the new Lord Orlock with Rei as his trusted confidant. In the new order, gangers were drawn from the Drudges and supplemented with members of the great families, ensuring the strongest and most loyal of the clan were in charge. Following the creed of the Code of Iron, House Orlock quickly regained much of its lost glory.[3a]

By M40 the House had begun its longstanding rivalry with House Delaque and this came to a head in M41 when the infamous Ashline Heist saw Orlock gangers hijack a mag-lev ore shipment in Delaque territory. Delaque retaliated with a blockade of Orlock mining operations, but their mining holdings proved too vast and spread out for it to be effective. In the Drypus Incident the Lord Helmawr stepped in, ruling in favor of House Orlock and increasing their power even further.[3a] 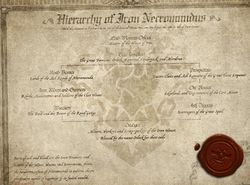 House Orlock is ruled over by the Clan Families, the largest and most powerful of which is Orlock itself. The ruler of the House is the Lord Orlock, who commands from his fortress known as The Crucible. Beneath these are the Orlock Families, the most powerful of which are Orlock, Kamund, Cinderjack, and Merdena. Each Family has its own role. Orlock are the largest and most powerful, Kamund are masters of mining the Spoil, Cinderjack run the engine cults that operate the clan's rigs and ash-runners. Over the years the Merdenas have challenged Orlock's right to rule the clan and some have even formed their own splinter clans. Each time they seriously challenged the Orlocks the Merdenas have been beaten down and grudgingly returned to their place in the pecking order.

The largest group within the House are the Drudges, serf workers who are little better than slaves. However unlike most other houses, the Drudges are still considered Orlocks and can join the gangs after proving themselves. This offers a way out of the crushing poverty of Necromunda and also serves as a means of control for Gang Lords who can promote the idea of hard work leading to power to ensure productive work.[3b] 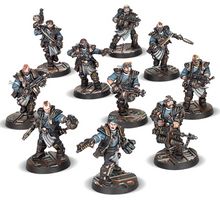 The name Orlock could be inspired by Count Orlok, the world famous vampire character from the 1922 silent movie Nosferatu.