House Taranis are a Knight House of the Adeptus Mechanicus, located on Mars. 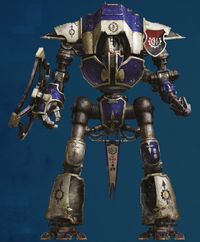 The first Knightly House to be established, House Taranis was founded on Mars before the formation of the Imperium. This truly ancient house predates any other by many hundreds of years. As the industries of the red planet developed into a vast metropolis of technological mastery, so too did it evolve to become the first and foremost of the forge worlds, and the Knights of House Taranis were its guardians. The STC technology supplied to many of the Expeditionary Fleets during Mankind’s expansion across the stars included designs for armoured suits of exo-armour based on those first developed to be used by the Knights of Taranis. When the Knight worlds were first rediscovered during the Imperium’s Great Crusade many thousands of years later, it is likely that the Mechanicum used their intimate knowledge of the Knight suits worn by House Taranis to help win the loyalty of those worlds.[2a] By the start of the Horus Heresy, Taranis fielded some 600 Knight suits, including large numbers of rarer Porphyrion, Atrapos, Magaera, and Styrix Patterns.[13]

House Taranis remained loyal to the Imperium during the Horus Heresy, taking part in the Battle of Mars on the side of the forces of Kane. All but two of them were killed, fighting the forces of the Dark Mechanicum. Two members of the Knights of Taranis survived and went into hiding, but their later fate is unknown.[1]

In 230.M41, the Knights of House Taranis battled a Daemonic incursion on Tarsok V. Despite heavy losses, they managed to defeat a Great Unclean One and win the day.[5a]

During the Indomitus Crusade, 3 lances of House Taranis Knights were deployed from the vessel Zar-Quaesitor.[8]