A skull surrounded by eight mechanical claws: the symbol of House Van Saar

The House of Van Saar, known as the House of Artifice[7b] is one of the six main gangs in the city of Hive Primus on the planet of Necromunda. They are known for their mastery of Archaeotech[7a] 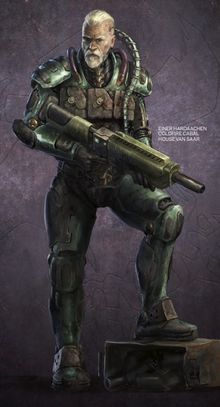 Van Saars are well-known for the superiority of their arms and equipment. Their technology is more cutting-edge than the other Houses. The House's manufacturing procedures are clear-cut and its completed products are of the utmost quality. The Noble Houses of the hive are known to pay handsomely for Van Saar-made goods; as a result, the House is undoubtedly the wealthiest in Hive Primus.[1] Due to this familiarity with Imperial weaponry, as well as the abilities to improve and use it in combat, Van Saars are often recruited by the Imperial Guard as "High Utility Conscripts".[2] Their staggering power, however, is built around a dark secret – flaws in their understanding the corrupted STC that creates their technology, flaws that bathe them in radiation and slowly kill them from within.[4]

The Van Saars have a well-earned reputation of being serious minded and sombre people, with a deeply deep-seated emphasis placed on order and hierarchy. Like the other gangs of Hive City the Van Saars have a style of clothing which distinguishes them from others. In their case this equates to a close-fitting body suit intended to defend and sustain the wearer in the harsh hive environment. Semi-permeable membranes in the suit reduce the loss of the body’s dampness whilst numerous spots on the material change colour to inform the wearer of airborne pollutants and reduced levels of oxygen.[3]

The House of Artifice is not only known for its wargear and weapons however, but also for its many alliances with the Merchant Guild, Clan Houses, and Great Houses of Necromunda. Bound together by a web of licenses and patents, the seal of the House of Artifice is found on thousands of pieces of tech throughout Necromunda. The seal of Van Saar on any piece of wargear on Necromunda lets one of its quality. However their power and prestige has led many to see the House as arrogant and overly secretive.[7a] Besides armaments and technology, House Van Saar also oversees a lucrative energy production industry. They have a number of allies, most notably House Catallus and the Pyromantic Cults.[7d]

The House jealously guards the secret of its hidden STC. When a Mechanicum team visited Necromunda in 132.M40, it mysteriously vanished when it began to investigate House Van Saar.[7c]

House Van Saar's history is tied heavily to ancient beings known as the Iron Lords, whose technology has been scavenged by Van Saar in the past. In M40 the Iron Lords sought to infiltrate the house and dispatched shapeshifting cybernetic agents to achieve this aim, creating a tech-war that saw the Archeoteks hunt down the cybernetica. Who these beings are exactly is unclear, but they are likely Necrons.[7c]

House Van Saar's history begins in the first galactic expansion of Humanity, before even the Imperium existed. The arcology vessel Van Saar, carrying a collective of scientists and settlers bound for the world of Araneus Prime, was swallowed up by the Warp. At some point in M35 the Van Saar was disgorged from the Warp and crashed into the wastes of Necromunda. There are conflicting accounts for what happened next, with some claiming that nearby Ash scavengers discovered the vessel and took the identity of Van Saar itself while others say it was chief Technical Officer (also known as Van Saar) crawled from the wreckage after millennia in stasis. Whatever the truth, the new Van Saar gang came to operate from the wreck of the vessel and slowly perfected their knowledge of the precious STC at its core under the direction of a secretive tech-conclave of Archeoteks some say was led by Van Saar himself. Openly, they flourished as tech scavengers and bazaar brokers. The wreckage of their ship would develop into a settlement which in time came known as Junkertown. [7b]

As Van Saar flourished, the Archeoteks would pass on custodianship of the STC to each new generation of their order. Some used it for the betterment of their people while others sought to scour Necromunda of all archaotech to gain a full monopoly. Archeotek Sater Davos is said to have driven an ancient data-spike into his brain, gaining a staggering intellect. He gained domination of Hive Rothgol and sought to learn all knowledge on Necromunda and its people. He eventually followed a trial of clues to the Van Saar STC and became determined to restore the Gang to the lost age they had originated from. Under his rule, Junkertown prospered and Davos oversaw the construction of the first survival suits and bionics to endure the radiation given off by the STC. By the turn of M37 an extremely aged Davos was still pouring the resources of the house into fulfilling his dream as Junkertown had now expanded its reach into other Hives on Necromunda. However, other Archeoteks said that Davos was bleeding the house dry and the Van Saar should instead seek domination of Necromunda itself. In 411.M37 Van Saar mysteriously vanished and in the aftermath of his disappearance a council of Archeoteks established the three laws. These laws laws established that the STC must always be protected and used for the betterment of the Van Saar, which saw the device moved from Junkertown and into Hive Primus. The Van Saar endured the subsequent Two-Faced War exceptionally well, supplying the armies of the aspiring Governor Lady Cinderak with the finest weapons. After emerging victorious in the war Cinderak used the Van Saar to build a vast space station known as the Eye of Selene. As a reward, House Van Saar was promoted to full Clan House.[7b]

By the start of M38 the Archeoteks of Van Saar were entrenched within the workings of Necromunda. This led to the gaining of many rivals, most notably the former tech masters of Hive Primus House Hera. In the latter years of M38 House Hera launched a massive digital assault upon Van Saar, unleashing cannibal-codes into the cortex vaults which, unknown to Hera, contained the STC. The cognitive engrams of the STC identified the rival House as an enemy and oversaw a series of industrial "accidents" that devastated Hera. This allowed Van Saar to quickly crush House Hera in a brutal counterattack. In the aftermath House Van Saar grew even more powerful.[7b] 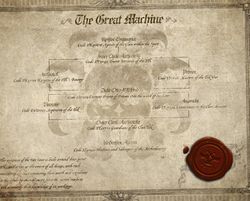 Supreme power in the House is overseen by the various Archeoteks, masters of tech-lore who oversee the secret STC at their core. While similar to the Adeptus Mechanicus, these figures have no interest in the religion of the Omnissiah.[7d] Beneath the Archeoteks are Primes, who act as middle-rank overseers. Beneath these are the Primes lieutenants which include Augmeks. Beneath these figures are Teks and Subteks, which is a catch-all term for workers and warriors.[7d]

Unlike the other Clan Houses which rely on gangs of slaves and uneducated masses of workers, every member of Van Saar is a expert in the task they undertake, no matter how simple it may be.[7d]

The House's territories extend to machine shops, underhive scavengers, and the heat sunk of Hive Primus known as the Thermal Core. However its main base is within the upper reaches of Hive Primus' Hive City, next to its spaceport. Hanging below the Spaceport is the Chamber of Light, where the precious STC of the House resides.[7d]