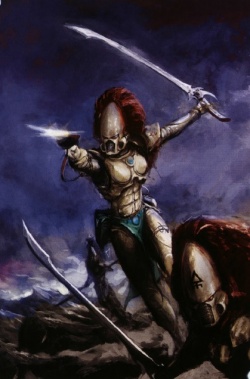 Howling Banshees are one of the types of Eldar Aspect Warrior who represent a facet of the war god Kaela Mensha Khaine. These lightly-equipped warrior-women are fearsome close combat specialists who draw their inspiration from the unearthly creature with which they share a name. What they may lack in brute strength they more than make up for in precision and efficiency, and their piercing warcry has signaled the doom of countless foes.[1a][2][3a] 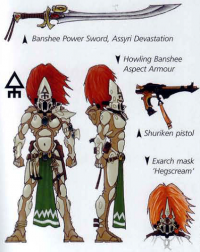 According to Eldar mythology, banshees are the harbingers of woe and death whose cry it is said heralds ill fate, calling forth dead spirits from the Warp and forewarning certain death. A more sinister implication of the banshee's call is that it may even tempt spirits out from their Spirit Stone and thus lure them into the arms of Chaos. What is known is that the release of a spirit is accompanied by a shrieking call, one which is felt rather than heard, and that spirits have been known to disperse unexpectedly during the transference between spirit stones.[1a][2] Legend says that the creation of the Aspect came when the Crone Goddess Morai-Heg desired the knowledge contained within her divine blood and thus sent her daughters to haunt their father, the war god Kaela Mensha Khaine, as he was the only being capable of harming another god. Seeking to end his torment, he decided to grant Morai-Heg her wish and severed her hand which allowed her to drink the knowledge contained within. In exchange for his help, Khaine was granted the Howling Banshee Aspect and thus it came into being.[4] As such, it is only fitting that the Howling Banshees are perhaps the most feared of all of the Aspect Warriors.[2]

When Asurmen raised the first Aspect Warriors, he selected Jain Zar for her ferocity and speed, whereupon she became the first of the Phoenix Lords. Of all the Pheonix Lords she is the most devoted to her shrines, traveling the Webway to spread and nurture her teachings on all the large Craftworlds.[1b]

Unique to the Howling Banshees is the fact that they are almost always female, for the banshee of legend is itself a female spirit. Fast and athletic, Howling Banshee training emphasizes swiftness of foot and mobility in hand-to-hand combat. Their Aspect Armour is coloured bone-white contrasted with a flaming shock of orange hair, while their principle armament of Shuriken Pistol and Power Weapon is a devastating combination in close combat. Their most notable weapon though is the Banshee Mask, a powerful sonic weapon which uses a psychosonic amplifier to turn their battle cry into a howling shriek of psychic rage which attacks their enemies' central nervous system. An entire squad of Howling Banshees activating their masks all at once can cripple an entire enemy unit before a single blow is landed, leaving them paralyzed and helpless before their onslaught.[1a][3a]

Howling Banshee operate in squads of five to ten warriors, including sometimes an Exarch to lead them. While fleet of foot on their own, these squads may also take advantage of Wave Serpent transports.[3a] 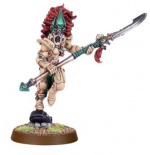 An Exarch is the leader of an Aspect Shrine. She is one that has traveled so far down the Path of the Warrior that she can no longer leave it and so dedicates herself fully as a high priest of Khaine. Exarchs wear more elaborate and ornate versions of Aspect armour which incorporate the spirits of past wearers, granting them not only wisdom and knowledge but a raw pool of psychic energy.

The Exarchs of the Howling Banshees emphasize their aspect to the highest levels and help pass this knowledge on to their squads. Under her guidance a squad of Howling Banshees are acrobatic warriors, leaping and bounding into combat with deadly grace, while the war shout of an Exarch is even more devastating than the normal piercing cry of a Banshee Mask[3a] Instead of a normal power weapon some Exarchs will wield an Executioner or Triskele, while others will replace both power weapon and shuriken for Mirrorswords.[3b]

In 838.M41 in what became known as the Pyre of Kiliak's Bane, Imperial xenologists began to plunder buried Eldar artifacts on the Maiden World Kiliak, bringing about a devastating assault from the nearby craftworlds of Biel-Tan and Ulthwé. A sighting of the Phoenix Lord Jain Zar, accompanied by a hundred of her disciples, was confirmed before the entire Imperial force was slaughtered and incinerated, their ashes scattered to the winds.[4]