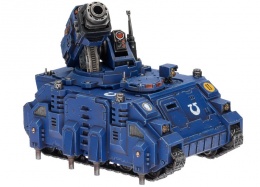 The Hunter Multi-Launcher is an anti-aircraft missile vehicle built on the Rhino chassis.[1] A variant of the Whirlwind, it is based on STC data which is much older than the more recent Whirlwind Hyperios.[3] Whereas Stalkers are deployed for air defense against light fast moving targets, Hunters are deployed when Chapters expect to face heavy enemy air assaults.[6]

The Hunter is the first known dedicated anti-aircraft platform fielded by the Adeptus Astartes. Prior to the discovery of the STC for the Hunter, Space Marine forces had attempted to retrofit various designs to the Whirlwind artillery vehicle, with largely negative results.[1] Though a stable pattern of anti-aircraft Whirlwind was ultimately achieved in the Hyperios, several Chapters have continued to use the Hunter on many battlefields, including the recent Third War for Armageddon.[3]

The Hunter is equipped with a Skyspear Missile Launcher, which fires a salvo of missiles each guided by the interred remains of a Chapter Serf.[5] The secret to the Hunter's success lies in that of its missile's tracking system, which is able to accurately engage fast moving aerial targets. The system itself is made up of altered brains and neural interfaces from Servitor operators. The servitors must be specially chosen, their brains possessed of a mental agility in life that is then re-purposed in near-death. These are often chosen from failed Chapter initiates should they be too damaged to become Serfs, either those crippled during their training or that have rejected the sacred implanting processes. Chapter serfs can also find a place as a target-servitor, if they show promise and serve well, earning the right to accompany the Chapter into war. In both cases, the brain, and as much of the head and torso of the initiate as possible, will be salvaged so that he might serve the Chapter in another way. Where possible, the servitor’s limbs are used to operate controls and weapons, but most importantly their brain is linked into the augur arrays of the missile. The process is not always successful and many servitors may die before one merges with the tank’s machine spirit, creating a deadly symbiotic relationship.[6]

The ammo store of the Hunter is divided into the skyspear savant missiles, each one encased in its own munitorum shrine-case, awaiting the moment it will be released into the foe, and clips of explosive ordnance. Each clip holds three missiles, and an auto loader is able to draw them from the racks and feed them into the launcher in a single smooth motion. Each of these three missiles bears a psalm of vengeance inscribed in red wax by one of the Chapter’s Techmarines, its hate-filled words a curse upon the enemy it strives to destroy. When the burst of missiles is fired, the wax melts into streaming crimson and the curse is given life.[6]

In Epic, the hunter is equipped with a Hunter Missile instead of a Skyspear Missile Launcher. The hunter missile used by the multi-launcher is faster and more accurate than those used by Whirlwinds, with unfolding fins to help guide it to the target, and the vehicle itself has a longer operational range. The missile is guided by a large scanning array that features an algorithmic precognitive targeter located opposite the cylindrical missile feed. STC Hunters feature one launch tube fed by a single rotary system, but some Techmarines have modified their charges with pairs launch units and a central sensor suite for improve efficiency.[1]