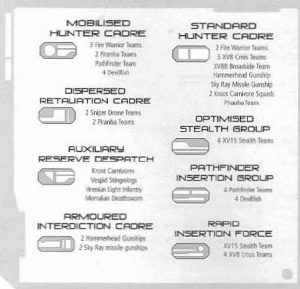 A Hunter Cadre or Cadre (Tau: Kau'Ui) is a standing combine-arms military formation of the Tau Empire. At its core the Hunter Cadre is composed of members of the Tau Fire Caste, organised into teams of warriors originating from the same Sept and often bound by the Ta'lissera, with allied species attached as Auxiliaries. Led by a veteran Tau Commander, and sometimes accompanied by an Ethereal, these cadres are considered to be capable of dealing with most any tactical situation they find themselves in on the battlefield. Averaging slightly more than fifty Tau, with some numbering up to a hundred in total, Hunter Cadres are roughly analogous to an Imperial Guard Company but differ in that the divergent combat arms are fully integrated at the tactical level and operate as one unit.[1][2a][2b]

The typical Hunter Cadre will have anywhere up to six Fire Warrior Teams along with a number of Pathfinder, Stealthsuit and Crisis Battlesuit Teams. A cadre will also includes a handful of vehicles, from general units such as Hammerhead Gunships to more specialized versions such as Sky Rays. A large stockpile of additional vehicles and equipment are kept on hand so that the Cadre can operate in a variety of roles: for example, mounting all Fire Warrior teams on Devilfish troop transports so that it can operate as a mechanized force. Auxiliary troops, including Kroot, Vespid and Gue'vesa, are normally kept at a higher level such as Command and assigned to the Cadre for specific tactical roles.[2]

The two most common methods of warfare employed by Hunter Cadres are the Mont'ka and Kauyon. Each method is taught by the great Fire Caste academies on each Fire Caste world and have their own adherents amongst the Shas'o and Shas'el masters. They are both based on two approaches to hunting; Kauyon involves bringing the prey to the hunter, Mont'ka involves the hunter running the prey to ground.[1][2a]

In the Tau Lexicon, the words "hunter" and "patience" are derived from the same root. This technique is the oldest of the Tau techniques and has the most variations. Essentially the technique relies on the interaction of the hunter and the lure. In recent times, auxiliary troops such as Kroot or Gue'vesa are used as the lure, although some septs still regard the role as one that honours both hunter and prey and allow only bonded Fire Warrior teams to undertake it. The lure's role is to expose itself to the prey and draw it into a position where it can be killed by the hunter. The more subtle Commanders have been known to use the absence of troops as a lure. Once the prey is in position, the lure is free to escape or help the hunter as the situation dictates. Hunters are frequently equipped with Crisis, Stealth or Broadside Battlesuits with weapons carefully selected for the particular battle at hand.[1][2a]

Roughly translated, Mont'ka is the "Killing Blow". It is the art of identifying a target of opportunity and attacking it swiftly with a Hunter Cadre, often deployed from a Manta missile destroyer. A Cadre pursuing the Mont'Ka may stand in readiness for several days awaiting the command to strike. During this time they will plan exact movements they will perform when the call comes. Often the decision to strike will come from a Shas'el or Shas'o with a good view of the enemy or the input of well-sited Pathfinders. It is firmly believed that the bond of trust between the Cadre that conducts the Mont'ka and the Commander who orders it brings honour to both. The attack will immediately be called off if the prey is too resilient or evasive.[1][2a]