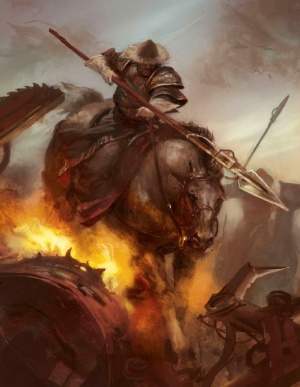 An Attilan Rough Rider with a Hunting lance.[1]

Hunting lances are single-use weapons employed by Rough Rider Squadrons of the Imperial Guard. The lance is effectively a nine foot long shaft with a shaped explosive tip. When the lance impacts with an enemy the tip explodes, increasing the killing power already behind the lance. Once used, however, the lance is rendered useless for the remainder of the battle.

These weapons are advanced versions of those used for hunting big game on the primitive worlds the Rough Riders themselves are often recruited from. They are particularly effective against riotous mobs or compact hordes of infantry. When used properly, they can prove to be more effective against heavily armoured troops than a standard lasgun. In game terms, this is demonstrated by the hunting lance's ability to bypass armour saves when the unit charges.

While hunting lances are, by far, most commonly fitted with a powerful explosive charge, many variants have been implemented over the millennia.[2]