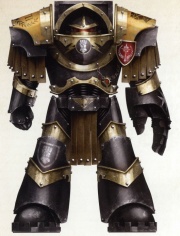 The Huscarls were the elite Terminator bodyguards of Primarch Rogal Dorn during the Great Crusade and Horus Heresy.[1]

The original Huscarls have their root in the Great Crusade. However since the influx of Primaris Space Marines into the ranks of the Imperial Fists, the Huscarls have been reconstituted by order of Roboute Guilliman. The new Huscarls, however, focus on organizing the defense of Imperial worlds.[2]

Huscarls in medieval Scandinavia and also later in Anglo-Saxon England were either non-servile manservants or household troops in personal service of someone, equivalent to a bodyguard to lords and kings.