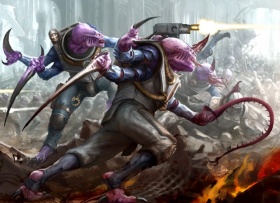 Hybrid Metamorphs are a type of Genestealer Hybrid. These creatures are typically part of the 4th or 5th generation of infestation, unleashed when the Genestealer Cult has committed itself to all-out war as an approaching Tyranid Hive Fleet draws near.[1]

Regardless of host species, Metamorphs will exhibit freakish mutations, echoing not just the forms of their original Genestealer descendants, but those of the wider Tyranid race. As the Hive Fleet near the system infected by the cult, the shadow of the Hive Mind falls upon the infestation’s latest cycles. The weapon-limbs of first and second generation hybrids begin to change, displaying sickle-shaped talons the length of swords or pincers strong enough to crush rock. Whip-like ropes of sinew form at the wrist. Mouths are replaced with masses of tendrils, semi-psychic appendages that lick or burrow into their prey in order to siphon surface thoughts. Throats fat, globulous glands full of bio-acid that can burn through metal in seconds. These myriad mutations become more and more varied as the cult makes its final preparations for war. Their exceptional ugliness is surpassed only by their lethality – the Hybrid Metamorphs are the most vicious of their kind, for they combine human intelligence with the raw alien power of Tyranid weapon-beasts.[1]

To the greater cult, the Metamorphs mutations are seen as blessings of a higher power. Hybrid Metamorphs are worshipped as living saints by the infected hosts that sire them. The lairs of these hybrids are strewn with grisly offerings – brood brothers hope that by pleasing these creatures, they appease the otherworldly powers that have brought them into being. In truth, they are created not by the Patriarch’s will, but by the immortal sentience of the Hive Mind.[1]

Though it is common for two of a Hybrid Metamorph’s weapon-limbs to become solely adapted for war, the third remains truly prehensile, able to manipulate complex machinery and utilize Human weaponry and technology.[1] 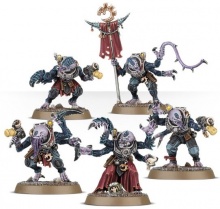