The Hydra Flak Tank is an Imperial Guard self-propelled anti-aircraft vehicle based on the Chimera chassis. Employed when Imperial Navy assets are unavailable or air-superiority is in the balance, Hydras provide essential anti-air protection for their regiment and can also serve in a ground support role, where they are effective against infantry and light vehicles.[1][2][3] 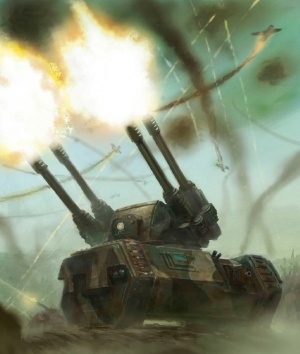 The Hydra Flak Tank in action.

Manufactured on hundreds of Forge Worlds, the Hydra is a specialised vehicle used for mobile air defence, protecting important sites and columns from air assaults. Its Machine Spirit-assisted automated turret contains targeting and tracking equipment, including a predictive logic-engine, which allows it to lock onto and track enemy aircraft regardless of any evasive maneuvering. These control four long-barreled Autocannons firing heavy calibre, high velocity explosive rounds capable of firing six hundred rounds a minute,[6] shredding through enemy aircraft fuselages thanks to their high rate of fire. When used against infantry and light vehicles these rounds are equally devastating, allowing even a single Hydra to decimate entire formations in a heartbeat. While the use of a Hydra in this role is a breach of official regulations, Imperial commanders often overlook such infractions.[1][2][3]

The quad autocannons are operated by dedicated gunner, who sits in the turret along with a loader to assist the auto-loaders, while the vehicle commander, driver and a comms operator sit in the main hull and share control the hull-mounted Heavy Bolter.[1][2]

Each regiment usually groups its Hydras into a single company, though this is more often for administrative purposes than anything else. Squadrons of Hydras or even individual vehicles will be parceled out to different units for air defence, with artillery given first priority for any available units, followed by tank companies and then HQ units and supply depots, though often static targets will be protected by Hydra platforms instead.[1][2] However, some regiments will consist entirely of Hydras. These 'heavy air defence regiments' will usually be split up and attached to different units and locations across an entire warzone, though occasionally it will fight as a single unit.[3]

Regardless of their crews’ attitudes or affectations, when Hydras roll into battle they can make all the difference to an Astra Militarum army. On Sarentos III, during the battle of the Sandsea, the Cadian 1652nd Armoured were tasked with breaking the Necron line. Roaring across the dunes, the Leman Russ squadrons of the 1652nd directed a withering rain of fire into their deathless foes. Great geysers of crimson sand were blown high into the air as the Necron line disintegrated before the tankers’ armoured charge. Then came the Doom Scythes. Screaming over the battlefield on howling repulsor-jets, several wings of the ominous alien craft began to strafe the Imperial tanks with the glowing beams of their death rays. Flames billowed and black smoke gouted forth as first one Leman Russ and then another exploded. Thoughwell prepared and outfitted for ground warfare, the Cadians were fighting without the military support of the aerial formations of the Aeronautica Imperialis, meaning they had no aircraft of their own to intercept this threat in the sky.[8]

For a perilous moment it appeared as though the 1652nd would be hurled back in disarray – but their commander had issued his own call for reinforcements. Barrelling over the crest of a nearby dune came three Hydras, tracks churning spumes of sand in their wake. The flak tanks marked their speeding targets and opened fire, filling the sky with fury. One after another, the Necron attack craft were riddled with holes. Driven by eldritch technology, the living metal of the ancient xenos flyers began to writhe, moving to fill in the gaping rents. Yet no matter how fast the puncture wounds were resealed, the Hydras’ quad autocannons continued to savage their targets. Flurries of sparks and crackling green lightning wreathed the hulls of the Doom Scythes as they plummeted to the dunes below, tumbling end over end and exploding with enormous force. As the last of the enemy aircraft turned tail and fled, the surviving tanks of the 1652nd pushed forward again, their route to victory now covered by the watchful guns of the Hydras.[8]

In addition to its two twin-linked long-barrled Autocannons and auto-targeting system the Hydra is also armed with a hull-mounted Heavy Bolter, as well as Smoke Launchers and a Searchlight. The Heavy Bolter is sometimes replaced with a Heavy Flamer, while other modifications include Camo Netting, a Dozer Blade, Extra Armour, a Hunter-killer Missile, and/or a pintle-mounted Heavy Stubber or Storm Bolter.[3]