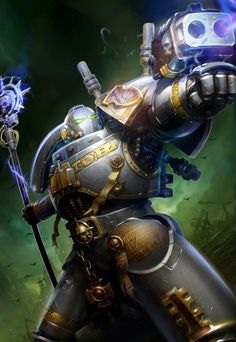 Hyperion, born Zael Effernetti, and known as the "Bladebreaker" is a famed and powerful Grey Knight, first manifesting as a "mirror" psyker, and later only strictly classified as a Pyrokine. Originally born in the Hive City Petropolis on Eustis Majoris, he was discovered and brought under the wing of famed Ordo Xenos Inquisitor Gideon Ravenor during the an investigation. After the conclusion of Ravenor's dark years, Zael's latent psychic abilities made him a prime candidate for the Grey Knights. His memory has since been wiped, and he remembers almost nothing of his past life.[1a][2][3]

A boy, about 14 years old, addicted to flects when he first appears. In the wake of Ravenor's investigation to uncover the source of the flects, Zael gets taken along for being able to "hear" the telepathic communication between Ravenor and Nayl. He is a psychic "mirror," with no real psychic capabilities of his own. As well as his precognitive abilities, he is able to use the psychic powers of others in his vicinity but not for an extended period of time. He also shares Frauka's attraction to pornography as demonstrated. Following Ravenor's submission to the Ordos for Inquisitorial Review, Zael was taken by Inquisitor Lilith Abfequarn[2]. She realized his potential and handed Zael over to the Grey Knights for testing.

History as a Grey Knight

After his genetic modifications, mind-wiping, and rigorous training to become a member of the Grey Knights, Zael, now renamed Hyperion, was made a member of a Squad Castian, an Interceptor Squad led by Justicar Galeo of the Grey Knights 8th Brotherhood under Grand Master Joros.[1a][1f] Hyperion was set apart from his brothers by his psychic potential and control, as well as being impulsive to the point of recklessness, which proved to be both a boon and a hindrance. While he served in Squad Castian, Hyperion wielded a Nemesis stave embellished with a human skull: the last remains of the original Justicar Castian.[1e] Hyperion's raw psychic potential had him earmarked as a potential Prognosticar, though ultimately his recklessness and lack of self-control had barred his entry into the Augurium.[1c]

Having a literal "baptism of fire", Hyperion's first major combat in the Grey Knights was the First War for Armageddon against the daemonic and World Eater hordes of Angron. Before the battle, certain he would die, he asked his traveling companion Inquisitor Annika Jarlsdottyr of his origins, and was able to learn of his early past.[1a]

It was on Armageddon that Hyperion's latent psychic might manifested after witnessing his Battle-Brother and friend Malchadiel being crippled at the hands of Angron. As Angron was about to finish his Battle-Brother and squad Castian, Hyperion intercepted the killing stroke of Angron's Black Blade with a burst of psychic energy, freezing it in mid-air. Using all of his power, Hyperion was able to at first crack then shatter the Black Blade. Rendering himself unconscious in the process, Hyperion's act allowed the rest of the Grey Knights, led by Taremar Aurellian, to banish Angron back to the Warp. The incredible act earned him the epithet Bladebreaker by the Space Wolves. After the battle, Hyperion learned he was the only member of Castian who hadn't been a casualty: Galeo and Dumenidon had died; Enceladus and Malchadiel were gravely wounded, with the former being comatose for what would become several months.[1a] Hyperion himself would later become a casualty himself when he collapsed into a coma caused by the massive neurological damage from the strain of breaking the Black Blade. Hyperion would have died had he not been placed in stasis immediately, and he would awaken just after four months afterwards, just in time to see the resolution of the war.[1b]

Later, Hyperion would inadvertently land himself in a central role during the cold war between the Inquisition and Space Wolves, later known as the Months of Shame. Reluctantly but obediently taking part in the Ordo Malleus' purges of the population of Armageddon following the war in order to erase all knowledge and the taint of Chaos, Hyperion witnessed the death of Grand Master Joros due to Lord Inquisitor Ghesmei Kysnaros' mismanagement and underestimation of the Wolves. He later took part in the conflict's climax over Fenris, when the entire fleet of the Red Hunters as well as Inquisitorial and Grey Knights warships besieged the planet. Hyperion, Annika, and Kysnaros attempted to try and negotiate an end to the conflict with Bjorn the Fell-Handed, but Bjorn had rebuffed Kysnaros' offer of a peaceful resolution to the conflict, at the price of full submission and a penitent crusade.[1b]

Hyperion and his remaining Battle-Brothers then fought on the Battleship Corel's Hope against Space Wolves Terminators led by Logan Grimnar himself. The timely intervention of Bjorn ended the conflict, on the condition that Hyperion go to The Fang and tell of his order to the Space Wolves, for they would never forget the Grey Knights as an enemy. Hyperion agreed, and traveled down to The Fang once more to tell of his Brotherhood.[1b] After the end of the war, though banished from the surface of Fenris, Hyperion, in orbit, used his psychic powers to witness the ritual of Bjorn being returned to slumber.[1d]

Fifty-five years after the battle on Armageddon, Hyperion would become a prognosticar, and like Torcrith before him, he would be the only surviving prognosticar at the time.[1e]