Iacton Qruze was the Captain of the 3rd Company of the Luna Wolves Space Marine Legion.[1a] A veteran warrior, Qruze would remain loyal to the Emperor at the outset of the Horus Heresy.[2b] 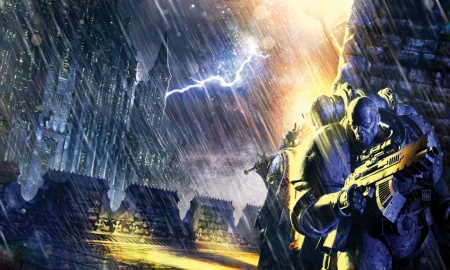 Considered ancient by dint of his length of service as well as his demeanour, Qruze was often known by his nickname of 'the Half-Heard'.[1b][1c]

A Captain in the Luna Wolves since the Legion's inception and a veteran of the Unification era (despite being born on Cthonia[2a]), Qruze held prominent status until the discovery of Primarch Horus, whose installation as the leader of the Legion heralded a new era of martial philosophy and accomplishment. Stubborn and a little cantankerous, Qruze was a reminder of the way the Legion had operated in the past. Seemingly unable to break old habits, Qruze still gave the old pro-Unity salute of a clenched fist held against the breast, rather than the newer Imperial style of salute.[1c]

Possessed of a powerful personal code of honour, Qruze took a businesslike and sober approach to warfare and was not fond of those who tried to introduce levity into discussions on the subject, like Tarik Torgaddon. Qruze was notably prone to giving long-winded and somewhat irrelevant declamations of his opinions, as well as enthusiastically and loudly sounding his agreement with Horus' plans. Primarch Rogal Dorn referred to Qruze as a sycophant ready to say anything in order to retain his commander's favour.[1b][1c]

Iacton Qruze made several attempts to gain the position of First Captain, but was never successful. Similarly, his removal from company command had been mooted several times amid the upper echelons, but nobody had the heart to go through with it. He was apparently considered as a possible replacement for Hastur Sejanus' place in the Mournival, however.[1b]

Despite all of this, Iacton Qruze was responsible for saving the Remembrancers Mersadie Oliton and Euphrati Keeler, as well as the Senior Iterator Kyril Sindermann from death during Horus' betrayal of the Legions at Isstvan III, battling the assassin Maggard in the hangar bay of Horus' flagship Vengeful Spirit.[2b] Escaping with them to the frigate Eisenstein, he endured all the horrors the crew of that vessel went through on their journey to reach Terra. Having formed a firm bond with Death Guard Captain Nathaniel Garro during the flight of the Eisenstein, the pair were told by Malcador the Sigillite, Regent of Terra, that they, along with Sister of Silence Amendera Kendel, were to form the beginnings of an organisation which would utilise "men and women of an inquisitive nature, hunters who might seek the witch, the traitor, the mutant, the xenos".[3a][3x]

Subsequent to this, Qruze was sent by the Sigillite to a nameless Imperial fortress on the moon, Titan, in the Terran system, to act as his investigator in the matter of Solomon Voss, a member of the Remembrancer Order who had been allowed to live by Horus, only to be later released and ultimately captured by Imperial Fist interdiction forces on the edge of the Sol system. Qruze investigated Voss alongside Rogal Dorn, who upon hearing of the incident, decided to personally intervene in the matter.[4]

Still later, Qruze was sent, along with Garviel Loken, to infiltrate the Dark Angels' fortress-monastery on Caliban, to ascertain the reasons for the Legion's strange silence since the outbreak of the Heresy. Their mission failed, and they were forced to escape Caliban without a clear idea of the Dark Angels' allegiance.[5]

On the mission to plant targeting beacons on the Luna Wolf flagship Vengeful Spirit, Qruze would meet his end, being killed in front of Loken by his genefather, Horus in the Mournival chamber, Lupercal's Court. Qruze's last act was to hand Loken his oath of moment he had originally given to Mersadie Oliton, a small parchment with the word murder inscribed on it. The killing of Qruze earned Horus the eternal hate of Loken.[7]

Possessed of a long, lined and well-tanned face, Qruze had white hair and a patchy grey goatee-beard. A distinctive trait was his soft, yet deep voice. He believed that others should make the effort to listen to him, so did not raise his voice. He was also said to believe that his softly spoken style was the reason for his 'Half-Heard' nickname, when in reality it was of course given to him because people didn't pay attention to half the things he said. It transpired, in a conversation with Garviel Loken, that he was actually fully aware of the real reason but chose not to let on.[1c]

By the time of his secondment as Malcador's 'hand', Qruze had taken to wearing plain grey power armour, completely unadorned by any Legion heraldry. He was gifted with a massive power-blade, smithed on the orders of the Sigilite; double-edged and as tall as an ordinary man, Tisiphone was etched with serpents, screaming faces and shed blood. The sword was handled by Rogal Dorn, who used it to execute Solomon Voss.[4]