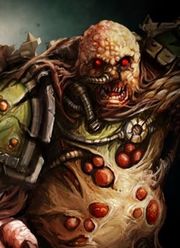 The resurrected Ignatius Grulgor corrupted by the powers of Nurgle

Ignatius Grulgor, known as the Eater of Lives[3] was Captain of the Second company of the Death Guard legion during the Horus Heresy. He has since been elevated into a Daemon Prince.

Grulgor was born on Barbarus and like many of his legion from that planet, despised some of the old traditions that his brothers from Terra practised.[2a] He was very headstrong, and always looked for a chance to impress his Primarch Mortarion. Shortly before the Battle of Isstvan III, Grulgor and his men were stationed by First Captain Typhon on the frigate Eisenstein with Captain Nathaniel Garro and his loyal Marines, whom he was supposed to eliminate.[2b] He failed, and was killed by a virus bomb that was damaged in his fight with Garro's men.[2c]

However while the Eisenstein was in transit through the warp, attempting to reach Terra after fleeing the Isstvan system, the ship's Gellar Field began to fail, and Grulgor and his fellow traitors were gifted by Nurgle with new life. They proceeded to attack the loyalist Death Guards once again. Grulgor managed to infect one of Garro's men, Solun Decius, with Nurgle's Rot, and almost triumphed over Garro. In desperation, Garro ordered an emergency reversion to realspace. Without the warp's infernal power sustaining them, Grulgor and his corrupted brethren were killed, their souls sucked back into the Immaterium.[2d]

Before an attack on the Knight world of Molech, Mortarion resurrected the daemonic essence of Ignatius Grulgor by killing all seven Deathshroud bodyguards in a single stroke of his battle scythe Silence inside the gene-vault aboard his flagship "Endurance". Grulgor was brought back infused with the power of the Life Eater Virus that had destroyed him, commanding the deadly plague at will. After that Ignatius Grulgor played a significant role in destroying the native fauna on the Molech in order to achieve Warmaster's victory.[3] After the battle, Grulgor was chained and held as a monster in the bowels of the Endurance.[4] Later during the purging of Ynyx Grulgor asked Mortarion to unleash him upon the surface of the world, but the Death lord refused to have anything to do with the abomination.[5a]

Following Typhon's betrayal which stranded the Death Guard fleet inside the Warp, Mortarion went to Grulgor and asked the Daemon to pledge that he would slay the First Captain if needed. Grulgor agreed, and when brought before Typhon strangled him to death. However due to the Destroyer Plague, Typhon quickly came back to life and both Grulgor and the First Captain laughed. Grulgor had fulfilled his oath, but Typhon was beyond death. Grulgor revealed that any oath he had taken to Mortarion was vastly eclipsed by his service to Nurgle. Grulgor's form dissolved and merged with Typhon, transforming the First Captain into Typhus, Herald of Nurgle and Host of the Destroyer Hive.[5b]

During The Fall of Medusa V campaign, Ignatius Grulgor reappeared in the form of a Daemon Prince to lead an attack of Chaos Space Marines against the planet Medusa IV. A notable battle of the conflict was the sacking of the monastery of Madrigales, as it was home to an Astropathic Choir made up of thousands which had enough strength to send messages to anywhere within the Imperium. What's more, its vast cogitator banks housed more than two thousand years' worth of stored astropathic communiqués, and so the monastery was considered of inestimable value by the Imperium. The siege of the monastery should have lasted weeks, if not months. But Grulgor and his Plague Marines made easy work of the garrisoned Imperial Guard, including three Leman Russ Battle Tanks from the Mordian Ironskins which guarded the gates. Grulgor smashed barehanded through the hull of one and then filled the crew compartment with pestilential filth, while a Chaos Land Raider, the Cradle of Desolation punched the turret off another. The third attempted to fall back through the gates but Grulgor shouldered into it, flipping it onto its roof. With the gates wide open, it took less than an hour for the Chaos Space Marines to overrun the monastery. An Adepta Sororitas strike team was called in to cleanse the monastery and retrieve the databanks, but by the time they fought through the now-filth-infested hallways, the astropathic choir had been slain and the databanks were removed. Gulgor and his forces quickly withdrew from the monastery and despite being chased through the surrounding valleys and mountain paths by Canoness Magda Comptress, they mysteriously vanished off the planet, a suppurating crevasse as the only sign of their passing.[1]