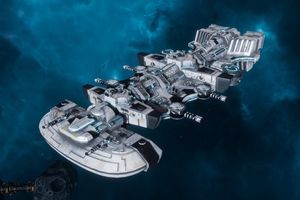 The Il'Fannor class cruiser (designated as Merchant class by the Imperium) was the next major ship designed by the Tau after the Gal'leath Class Battleship.

It was originally designed to become the new workhouse of the fledgling Tau Empire, its Gravitic Drive being able to reach a third of normal warp speed. As the Gal'leath proved ineffective as a military vessel against the Orks, the Merchant was heavily redesigned into a cheap and effective (if rather slow) warship that remained the Tau's mainline military ship until the advent of the Lar'shi class. As a cruiser, it lacks the hard-hitting firepower, speed and durability of those of the other major races, but makes up for it by being very cheap and easy to produce.[1]

The more popular design incorporates mid-range port, prow and starboard Railgun batteries that are able to fire in multiple arcs. They also utilise two Gravitic Hooks that can transport smaller vessels that do not have their own warp drives.[1]

This subtle redesign replaces the Gravitic Hooks with short range Ion Cannons and is thus able to be better utilised in up close engagements independently.[1]