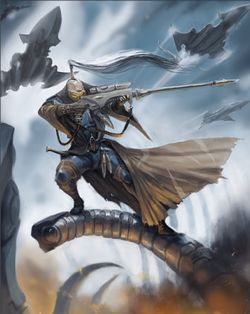 Illic Nightspear has wandered the Path of the Outcast for thousands of years, seeking unknown regions of the Galaxy. He is known to different Ranger bands by many different titles; the Sentinel of the Stars, the Wayforger, the Shield of Alaitoic, and he cares little which name is used. A master of the Webway's geography on a level that only the Harlequins surpass, it is said by the Eldar that he can arrive unheralded upon any planet, stepping through its Webway Portal with ease. Indeed, some say that he knows too much.[2]

Over the centuries, Illic's knowledge has benefited Alaitoc and its brother Craftworlds greatly, having guided many Eldar warhosts through the paths of the Webway to do battle on faraway worlds and arriving to turn the tide of battle. In addition, his skill and accuracy with a Ranger Longrifle is unparalleled and many an Ork Warboss, Necron Overlord, Chaos Champion, and Imperial Guard General have met their end at his gaze. However, Illic has walked the Path of the Outcast for so long that it is no longer clear if he can ever leave it. Thus he wanders the galaxy, pursuing some hidden agenda that his acolytes whisper is the only thing staving off the Rhana Dandra. He has fought against the rise of the Necrons, sought out lost Seerstones, and many say he seeks to transcendent the mortal plane altogether. Despite his mysteries, he has nonetheless attracted a loyal following of Eldar Pathfinders.[2]

Initially trailing the Necrons in order to study them, Illic Nightspear would find himself a captive of the infamous Necron Overlord Zahndrekh on the newly conquered Tau world of Cano'var alongside the White Scars Captain Kor'sarro Khan. Khan and Nightspear would join forces with the other prisoners in attempting to escape the world, and the two were the only survivors of the bloody battle against Obyron and his guards[1a]. Later, Nightspear would aid the Eldar Farseer Starbane in his crusade of vengeance against the Necrons, leading an assault upon the Tomb World of Carnac.[1b]

Following the creation of the Great Rift, he now plays a prominent role in the many battles now taking place within the Webway. Illic's intimate knowledge of that mysterious labyrinth dimension has allowed him to repeatedly come to the aid of the Eldar, including warhosts from each of the major Craftworlds, beleaguered Harlequin Troupes, and several congregations belonging to the newly formed Ynnari.[4]

Illic is armed with the Voidbringer, a potent Warp-tearing long rifle.[3] 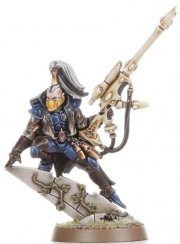