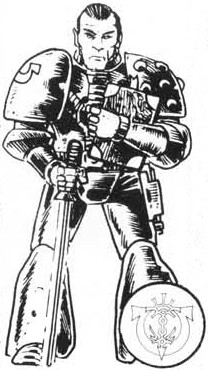 [Asata] was not surprised to see the elegant form of Astropath Illiyan Nastase staring out sightlessly from the edge of the ramparts. The half-human psyker never failed to unnerve him. As he approached, the shrill voice of the bastard pierced the hot evening air. 'Captain Keorn Asata', he announced, without turning his head, 'your footfalls are as distinctive as an Ambull dancing upon a tile roof.'[1a]

Illiyan Nastase is a half-Eldar, half-Human Imperial Astropath, who was the Chief Librarian of the Ultramarines in late M41. Before this, Nastase had been a Consul helping to run the advisory Senate to the Master of the Adeptus Astra Telepathica, and had assignments with the Imperial Fleet and Dark Angels Chapter.[1b]

Nastase was born on Badab in Ultima Segmentum following the expulsion of the traitor planetary governor Lufgt Huron in 912.M41. He was a bastard, with a Human mother and an unknown Eldar mercenary father. He was gene-tested at birth in accordance with Imperial Law, and was subsequently taken into Imperial custody.[1a][1b]

He was reared in the government compound by the Imperial Mission which had taken over running Badab after the Badab War. Nastase was considered a potential psychic, and undertook the journey to Terra in 924.M41 along with other potential psychics. On Terra, further tests led to him undergoing the Soul Binding ritual in 925.M41, which scarred and blinded him. From that point, Nastase was recruited into the Administratum as an Imperial Astropath.[1a][1b]

Nastase attained the ranks of Secundus, Prefect and eventually rose to become Consul for four years, helping to run the Adeptus Terra's advisory Senate to the Master of the Adeptus Astra Telepathica. After this he undertook four years service with the Fleet, and a further two years with the Dark Angels Chapter.[1b]

Following this, he was appointed as chief of the Macragge interstellar communications link under the jurisdiction of the Ultramarines in 965.M41. By 987.M41, Nastase had become the Ultramarines Chief Librarian, with his own unique Ultramarines badge. As an Astropath, Nastase remained a member of the Adeptus Astra Telepathica during his posting, ultimately answering to the Adeptus Terra, and was not a Space Marine despite holding office within the Chapter, and being given Power Armour.[1b][1c][1d]

Nastase was stationed at an Ultramarines fortress, along with Captain Keorn Asata, who he talked to countless times, and the sound of whose footsteps he came to recognise. Despite this, his presence was still always unnerving to Asata, who was highly suspicious of psykers, and even considering killing him and spat venomously before speaking to him.[1a][1e]

During an Ambull hunt to test new Ultramarines recruits, Nastase was positioned on the fortress' uppermost battlements, staring sightlessly from the edge of the ramparts. He was able to faintly pick up the recruits telepathically, and thought that they must have taken more casualties than anticipated due to how faint their signal was. He heard Captain Asata approach, talked with him about this, and patiently listened to the anecdote he had heard many times before of Asata's initiation.[1a]

As half-Eldar, half-Human, Nastase had an elegant form, a shrill voice, and a strangely delicate face with a long aristocratic nose, tight but large lips, and characteristically sharp ears. As an Astropath, Nastase was blind, with empty eyes hidden by dark plasflex hemispheres almost concealing the puckered scar tissue around his eye sockets.[1a] By 987.M41, Nastase was seventy-six years old, but thanks to his Eldar ancestry showed little signs of aging.[1b]

He had psychic abilities: an innate Psychic Sense and Psychic Awareness, Astrotelepathy, the abilities to become a Psychic Beacon, to Resist Psychic Attacks, to Sense Presences (including being able to detect a unit of new recruits from a distance),[1a] and detect Warp Space Trails. He could cure injuries, and had some Immunity from Poison. He was Telekinetic, and offensively could Steal Minds, and use Mental Bolts.[1b]