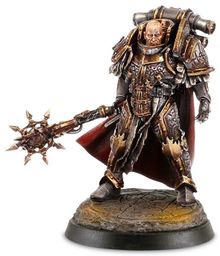 Illuminarum was a ornate sceptre-Power Maul fashioned for Lorgar by his fellow Primarch, the master weaponsmith, Ferrus Manus in a rare display of filial support due to Word Bearer aid on Galadon Secondus. As long as an Astartes warrior, it was formidable weapon that was perfectly balanced for Lorgar's strength and size. Apocryphally, Illuminarum was seen as the pattern on which the Chaplains' Crozius Arcanum were later based on.[1]

Lorgar states when in conference with his First Captain and First Chaplain that Illuminarum is more of a symbol of office than an actual weapon.[Needs Citation]