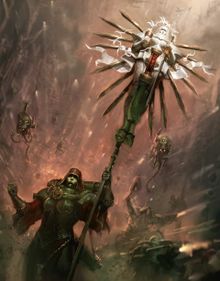 An Imagifier is a member of the Sisters of Battle who carries a Simulacrum Imperialis into battle. Within Seraphim squads the Veteran Sister Superior carries the holy symbol on her, effectively becoming an Imagifier.[1]

The role of an Imagifier is sacred to the Sisters of Battle, for it falls to them to extoll the virtues of fallen Sisters and to preach their deeds amindst battle so that the martyr's spirit may inhabit the warriors of the Order. They bear a banner mounted with an image of a revered martyr inscribed with holy text that when held aloft serves as a locus of faith to the Sisters of Battle. The Imagifier recounts the martyr's righteous deeds over the roar of gunfire, inspiring nearby Sisters to new heights of violence. Many Sisters are brought close to tears in the presence of an Imagifier, for to have served the Emperor so valiantly and to have died in his name is the ideal to which all Sisters aspire.[4]

An Order often has multiple Imagifiers serving at any one time, often deployed across disparate war zones. On the front lines they accompany the ranking Canoness and serve as part of her retinue, ensuring that they are positioned wherever the fighting is thickiest. When faced with the enemy, an Imagifier plants her standard in the earth and takes up her weapons. Even while firing upon the enemy does she continue to intone the glories of the fallen, missing not a syllable of the litanies as she guns down heretics and xenos. Those Sisters ordained the rank of Imagifier have typically shown themselves to be worthy while serving as a Sister Superior or Celestian, though in rare cases a lower-ranked member who has proven herself may be given the role. An Imagifier trains for her new duty through phenomenological studies of a particular martyr, memorizing not only their deeds but also the holy significance of their death. Where possible the remains of the fallen are exhumed from the Order's crypts and relaid in state, allowing the Imagifier to meditate over the corpse as she engages in her training. The Imagifier then guides Sisters from the Orders Pronatus in crafting the martyr's image.[4]

Celestian Imagifiers, acting as part of a Command Squad may carry a Blessed Banner or the Sacred Banner of their order instead of a Simulacrum Imperialis.[3]