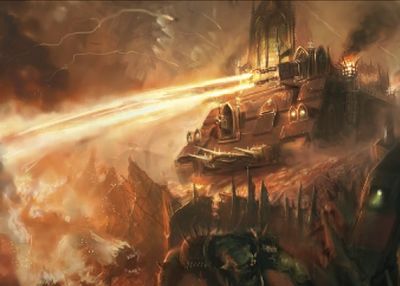 The Immolator is a variant of the Rhino chassis and used exclusively by the Adepta Sororitas as a transport.

The design specifications of the Immolator was first discovered within an ancient factory complex on Fornost, during the Icaria Crusade in M35.[1][2a] There a force of Frateris Templars captured an ancient factory complex intact, allowing an Adeptus Ministorum missionary team to freely explore its contents. Missionary Morben the Devout discovered databanks from the Dark Age of Technology and reported his findings to his superiors. knowing the value of this information to the Adeptus Mechanicus, the Ministorum used it as a bargaining chip for negotiations. Eventually the two organisations came to an agreement, the Fornosian Accords: the Mechanicus would have access to the databanks, and in exchange the Ministorum would have exclusive claim to any new technologies discovered.[2a] After inspecting through the databanks, the only new design to be found was for a flame-thrower tank. Combining this knowledge with known STC designs for the Rhino, the Tech-priests of Mars came up with the Immolator and began exclusive production of it for the Ministorum.[2a]

Immolators are typically operated by a Dominion Sister with additional vehicular combat training.[8]

The Immolator can be equipped with numerous upgrades.