The Imperial Aircraft are controlled and deployed by the Imperial Navy rather than the Imperial Guard. There is a wide variety of type, including fighters, bombers and landing vehicles. They are generally less well armed and armoured than Space Marine vehicles.

The Avenger Strike Fighter is an Imperial strike fighter, whose main role is conducting high-speed, low-level attacks on ground targets, mainly armoured vehicle formations and high-value strategic assets such as munitions or fuel dumps. The Avenger is an ancient design, believed to originate from Holy Terra during the Age of Strife and is now a staple of any Imperial Navy air support mission.[16]

The Thunderbolt heavy fighter is one of the three main types of fighter aircraft employed by the Imperium of Man. Like the Lightning fighter it is primarily designed as an atmospheric fighter craft, rather than a star fighter like the Fury interceptor. The Imperium typically employs Thunderbolts as air superiority fighters and Lightnings as reconnaissance aircraft, interceptors, and escort fighters. As an air superiority craft the Thunderbolt is better armed and armoured than the Lightning, but slower.

The Thunderbolt is classified as a heavy fighter or fighter-bomber and can be launched without a runway using a ramp catapult. It is armed with two synchronized laser cannons, four autocannons, and either guided missiles or unguided rockets. It can also carry a small quantity of light bombs. It is equipped with a vectored thrust system for increased manoeuvrability.[1]

The Lightning is mainly used for establishing air superiority or reconnaissance over the battlefield due to its improved manoeuvrability over the Thunderbolt. It comes with 2 Lascannons and an optional centre mounted Autocannon or 2 centre and 4 wing mounted Hellstrike Missiles to turn it into an effective ground attack aircraft.[2]

The Lightning Strike is a variant of the Lightning, replacing the long-barrelled Autocannon with 2 extra Hellstrike Missiles. 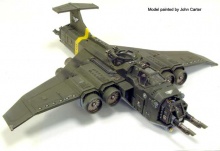 Marauder Bombers are huge aircraft, capable of carrying two thousand kilograms of ordnance. Each Marauder possesses a massive bomb bay, along with a pair of lascannons and two pairs of heavy bolters for defence against enemy fighters. Marauders were the Imperial Navy's original space-borne bomber craft before their replacement by the equally large, but more advanced and heavily armed, Starhawk bomber class. The Marauder is also equipped with vector-thrust.[3]

The Marauder Destroyer is a variant of the Marauder Bomber but modified for low, night flights. They have a different armament - their bomb capacity being reduced in favour of multiple Autocannons for strafing ground targets.[4]

The Valkyrie is a heavily armed airborne armoured assault carrier with VTOL capabilities, it can transport twelve Imperial Stormtroopers into battle and give supporting fire with weapons mounted on the nose, wings and in the cargo doors.[5] Variants include the Vulture, Vendetta, and Sky Talon.

The Arvus Lighter is s small lander sometimes used transporting cargo, but in rare cases used as an airborne alternative to the Chimera.[7]

The Aquila Lander is a small lander sometimes used for transporting important personnel.[8]

The Devourer Dropship is a heavy landing ship used to move Imperial Guard forces from orbiting transports to planetary surfaces.

The Imperial Navy also employs craft purely for space combat, these include -

Space Marine aircraft are generally designer to operate in both atmospheric and space combat roles.

The Thunderhawk is a heavily armoured space and atmosphere aircraft designed to be the ultimate Space Marine aircraft, providing air support/transport for the brothers of the Chapter.

The standard pattern Thunderhawk Gunship is able to carry 30 Space Marines or half this number of Terminators/Jump Pack equipped Space Marines. The ships's weaponry includes 4 twin-linked Heavy Bolters (2 turrets mounted on front wingspans and 2 turrets on the wings), a twin linked Lascannon and a Turbo Laser or Battle Cannon. It can also carry up to six Hellstrike Missiles, which for some rare missions can be replaced with Heavy Bombs. The crew consist of 4 specially trained Space Marines.[9]

The Thunderhawk Transporter is a transport variant of the Thunderhawk Gunship and is used for ground vehicle deployment with less weaponry (only twin linked Heavy Bolters) as a trade-off for 2 additional motors. Specialised variants are not unheard of, especially for high level Inquisitors, Chapter Masters or great heroes of the Imperium. As some Chapters do not possess the industrial equipment or manpower, Thunderhawks are frequently built on Forge Worlds. Even though most of the Chapters use their own facilities they make special efforts to ensure the security of the high level technology needed for the construction of the gunships.[10]

Stormraven Gunships are gunships utilized by Space Marine Chapters. Smaller and swifter than the more common Thunderhawk, they seamlessly combine the roles of dedicated gunship, dropship, and strike aircraft.[11]

The Stormtalon is a light gunship and interceptor aircraft used by Space Marine chapters.[17]

The Stormhawk is a small interceptor and aerial superiority aircraft used by Space Marine chapters.

The Caestus Assault Ram is the primary assault ram of the Space marines. It is mainly used to board enemy ships, but it can also be used as an orbital dropship to land troops directly in the battlefield.[12]

Stormbirds were used during the Great Crusade by the Space Marine Legions until the improved Thunderhawks largely replaced them. It is know that they were built in Terra by the Yndonesic Bloc for the use against the Panpacific tribes during the Unification Wars. As they were replaced by the smaller Thunderhawks the Luna Wolves kept a large number of Stormbirds.[15]

A new evolution of the Thunderhawk used by the Primaris Space Marines.

Drop Pods are used by Space Marines and other forces for orbital insertion and are one-way rides. Once launched, they plummet through the atmosphere until retro jets fire to slow their descent.

The Wolfcub is an atmospheric fighter flown by the Enothian Air Force. It has a decent punch ,with four nose mounted cannons; but its conventional pulse engines make it much less nimble than vectored thrust designs such as those flown by the Imperial Navy.[14]

The Orion Gunship was a type of assault craft used by the Custodian Guard during the Great Crusade and Horus Heresy.

The Ares Gunship was a type of attack gunship used by the Custodian Guard during the Great Crusade and Horus Heresy.

Used by the Custodian Guard during the Great Crusade and Horus Heresy.

The RE-45 is a type of civilian shuttle.

A type of civilian and military shuttle.

The Talion is a type of gunship and landing craft used by the Adeptus Custodes and Sisters of Silence.