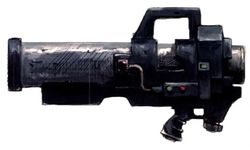 The Imperium operates a variety of Missile Launchers and Rocket Launchers.[1]

The standard Locke-pattern[1] Imperial missile launcher has a built in targeting device and is fired from the shoulder. It is a single round weapon and cannot be fired on the move. Standard Imperial Guard doctrine is for one man to carry aim and fire the missile launcher, whilst a second man carries the ammunition and re-loads the weapons. A well-drilled fire team can maintain a formidable rate of fire, enough to daunt the bravest of tank commanders. Amongst the Imperial Guard, missile launchers are crew-served weapons, while Space Marines are strong enough to use and reload missile launchers alone.[2] 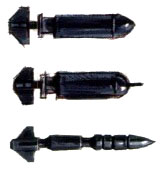