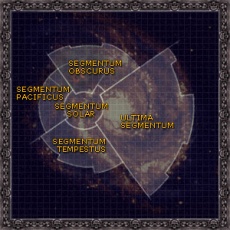 The Imperial Navy administrative Center is the Naval Headquarters on Terra.[9]

Below the Lord Admirals are various Sector and Battlefleet commanders, then individual ship Captains and junior officers and below them a myriad array of Non-Commissioned Officers. The Imperial Navy has a corps of Commissars that oversee the morale and discipline of Naval personnel, known as the Fleet Commissariat.[6]

Imperial Navy vessels require personnel from other Imperial factions in order to function. These include Navigators from the Navis Nobilite for navigation[13], Astropaths for interstellar communication[14], and Tech-Priests from the Adeptus Mechanicus for higher maintenance[14]. One of the foremost duties of the Navy is to transport the Imperial Guard to warzones, and as such every Navy vessel no matter how small will sport some means of training deck to accommodate them.[11b]

The lowest level of personnel in the Navy hierarchy are bondsmen, which in truth are little more than slaves. Alongside Servitors, these poor souls undertake the most thankless and often most dangerous tasks on a vessel. Bondsmen are acquired from a variety of means, such as rounding up criminals or unsavory elements of Imperial society or simply being born into their status aboard a vessel. Bondsmen duties include cleaning, hauling ammunition into weapons chambers, shoveling fuel, and manual labor. Working long hours and only fed meager rations, Bondsmen are met with brutal discipline should they protest their status.[11a]

Imperial Navy workers load a Torpedo into its firing tube[12]

The Imperial Navy is composed of a vast array of different types of vessels - from one-man attack fighters to huge Battleships that are many miles long.

Battleships are huge vessels, with colossal amounts of weapons and shields, and usually serve as the flagship for the Admiral of the Fleet, though this is not always necessarily the case. Although very powerful, battleships are very slow to manoeuvre and cannot react quickly to enemies that rapidly change course. Imperial battleships can have crews of anywhere between 25,000 to 3,000,000 or more depending on sources, including large numbers of Imperial Navy armsmen to defend against enemy boarding assaults. Battleships can be up to 8 kilometres from prow to stern and displace billions of tons. Because they represent such a vast expenditure of resources and require a fairly advanced technical base, these are typically constructed only in the largest shipyards above the major Adeptus Mechanicus Forge Worlds. These vessels are precious assets and are carefully husbanded, usually employed in only larger fleet formations.[2]

There are various classes of Imperial Battleship, but the Emperor and more recent Retribution are by far the most common in the Imperial Navy.

Smaller that Battleships, Cruisers are the Ships of the line in Imperial Fleets. There are several different sub-categories of Cruiser.

Grand Cruisers are significantly smaller than battleships, yet distinctly larger than regular cruisers. These vessels are usually very old in design and do not incorporate many of the features that are typical in current Imperial Navy vessels, like the armoured prow, and are not entirely compatible with current navy tactical doctrine. Due to this, many are retired from active duty, but are still used by reserve fleets. There are also some modernised versions of grand cruisers in service, but since these are much larger and more heavily-armed than their predecessors, they are more often classed as battleships. These kinds of vessels are usually purpose-built or modified from battlecruiser hulls and are not commonly encountered in the Imperial Navy.[2]

Battlecruisers are based on a hull-design that is similar to the regular Cruisers, though Battle Cruisers are generally somewhat larger and more heavily armed, incorporating more advanced power distribution systems capable of supporting battleship-grade weaponry in a cruiser hull.[2]

Cruisers make up the majority of a fleet. Though not as powerful as a Battleship, cruisers are much faster and can still deliver a deadly blow. There are multiple classes of cruiser, most based on the same general hull design but incorporating different combinations of broadside batteries, lance turrets and starfighter hangars. Cruisers can carry a crew complement of anywhere between 1,000-100,000[3], depending on sources. While cruisers are still particularly complex, it is not uncommon for them to be constructed on smaller Forge Worlds or any Civilised World that has a shipyard suitable for constructing vessels of their size.

A subset of the cruiser category are the Light Cruisers. These ships fall in size between cruisers and escorts, mixing the firepower and durability of the former with the speed and manoeuvrability of the latter. Light cruisers are a fairly common ship class, for they are relatively simple to construct for being a capital ship, and they are uniquely suited for reconnaissance patrols and for making a presence where their speed and manoeuvrability are an advantage, and where having a larger number of smaller hulls allows the Navy to monitor a wider area of space.[2]

Escort ships are the smallest type of ship in the Imperial Navy fleets, found in two distinct sub-classes.

The larger of the two are Frigates, which are better armed and more heavily armoured. Destroyers are generally smaller, but they are by far the fastest and most manoeuvrable interstellar warships employed by the Imperial Navy. They are usually organised in squadrons of 2 to 6 vessels and will always operate as a group. The main task of the escort ships is to serve as a screen for capital ships against enemy torpedoes and attack crafts so that they can get into position more quickly and safely. They are also employed behind the gun line to finish off enemy cruisers that have been damaged so that the larger vessels can concentrate on the most important threats in an enemy formation. Most escort classes specialise in a certain role, such as the Cobra class torpedo boat destroyers or the Firestorm class frigate with its armour-piercing prow-mounted Lance. Escort ships are normally not more than 1.5 kilometres in length, with destroyers generally being only 750 metres to 2 kilometres from prow to stern.[2]

Note on variations in Classes

While naval warships can be defined along a fairly limited number of classes based on weapon configurations approved by the Adeptus Mechanicus, the form these vessels takes varies widely throughout the Imperium. For example, a Lunar class constructed above Cypra Mundi in Segmentum Obscurus may bear little resemblance to a Lunar class constructed above Kar Duniash in Ultima Segmentum and even less so to a Lunar class, constructed among the vast shipyards of Mars. Nonetheless, they will all have roughly the same operating characteristics and weapon configuration, and thus can be easily serviced by any orbital facility throughout Imperial space.[Needs Citation] 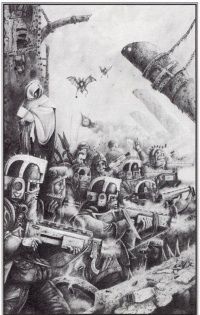 Many Imperial vessels carry onboard various smaller craft for both offense and defense.

The branch of the Imperial Navy known as the Aeronautica Imperialis is responsible for the majority of Imperial Aircraft. These aircraft are used both for space-combat and providing air support to Imperial ground forces.

Notable Members of the Imperial Navy