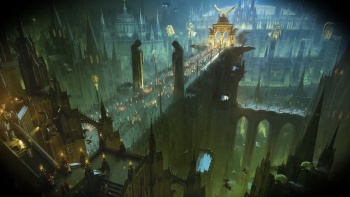 The Imperial Palace is a vast edifice that serves as both the palace of the Emperor of Mankind and the capital city of the Imperium of Man. Built across a large part of the Asian[8] continent on Terra, the Palace is divided into the Inner and Outer Palaces. The Palace is built to truly monumental proportions; seen from orbit, it consists of connected kilometres-high monolithic and pyramidal structures, marked with landing pads and studded with defense weaponry.[1][2] The palace itself is the seat of the Adeptus Terra, but is overseen by the Adeptus Custodes.[6]

Not only is the area of the Imperial Palace is enormous, its macro-habs and space ports break through the atmosphere and rise into the void and its sub-levels dig deep into Terra's holy bedrock, in some places reaching a depth of hundreds of miles below the surface. Its vaults, corridors, fastnesses, plazas and chambers, are so multitudinous that no single record remains to list them all, and the techno-urbanic serf tribes, clan holdings and societal sub-nations that dwell within its walls could populate entire star systems.[19b]

An area of the Imperial Palace Complex during the Horus Heresy

The Imperial Palace has only come under major attack twice, being the site of most of the fighting during the Siege of Terra at the climax of the Horus Heresy. During the Heresy Rogal Dorn was forced to dramatically increase the Palace defenses, causing much of its splendor to be dismantled in favor of cold military necessities.[8] As of the 41st Millennium, the Imperial Palace still bears the scars of that titanic battle.[4] After the Heresy, the Imperial Palace also saw an Eldar raid and damage from falling debris during the War of the Beast.[15] Ten thousand years after the Heresy Terra faced its second major assault following the Thirteenth Black Crusade. Thanks to the formation of the Great Rift the Palace was assailed by the vast legions of Khorne, which were turned back by the newly reborn Roboute Guilliman before they could reach the Eternity Gate.[17b] 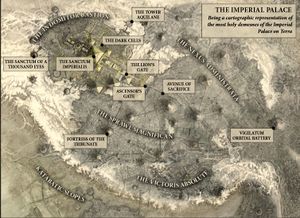 An aerial view of the modern Imperial Palace

Due to ancient laws prohibiting construction too close to the walls, the area around the Outer Palace walls are empty which is an extreme rarity on Terra. Those that live close to the walls exist in both splendor and squalor.[18a]

The walls surrounding the Outer Palace are of gargantuan proportions. The walls are 30 meters wide and taller than the greatest structures of the rest of Terra, in some areas being 1,100 meters in height[27d]. Defense towers consisting of massive gun-citadels run every hundred meters along the walls lengths. Inside the walls are endless amounts of power generators, ammunition trains, aircraft hangars, barracks, and void shield generators. Stretching for thousands of kilometers and with relatively few Custodes, much of this area are defended by regular Imperial Guard Regiments such as the Lucifer Blacks and Palatine Sentinels. Hundreds of thousands of men live and die within the walls of Terra, which in truth is more of a contiguous fortress than a simple barrier.[18a]

In addition to its network of walls and gun batteries, the Imperial Palace is protected by a Void Shield array known as The Aegis. Designed by the Adeptus Mechanicus and perhaps the most sophisticated of its kind within the Imperium, the Aegis is a multi-layered self-repairing void web that encompasses the whole of the Palace and even slightly beyond. In its strongest areas the Aegis is capable of stopping the penetration of any object above a half-gram traveling faster than two meters per second. While The Aegis is invincible against orbital bombardment is theory, in its weakest outer reaches slow-moving aircraft can penetrate the shield and attack its open generators.[21b]

The Imperial Palace is as heavily urbanized and populated as any hive city. Adepts numbering in the billions work and reside within the Palace. The Outer Palace is also heavily urbanized by a population of destitute non-adepts. The Adeptus Custodes maintain a constant vigil over the Imperial Palace, and are among the few permitted to pass beyond the Eternity Gate into the Emperor's presence. The Adeptus Arbites are responsible for maintaining order and vigilance within the Outer Palace, especially outside official buildings which are often thronged with the queue lines of those seeking employment within the Administratum. Shock troops quickly put down the vicious queue riots that occasionally erupt.[1][2][3]

The Palace is the heart of the Administratum[3]. Countless souls labour in the immeasurable archives and headquarters of the Imperium, ordering and maintaining an empire that spans the galaxy. Without them, the Imperium would lose all access to its history and databanks. Also, it is the seat of the High Lords of Terra, who are charged with interpreting the Emperor's will. These twelve Lords are accounted the most powerful of all living men. They guide the overall strategy of the inexhaustible armies of the Imperium, and uphold the Emperor's might across a million worlds.[Needs Citation] 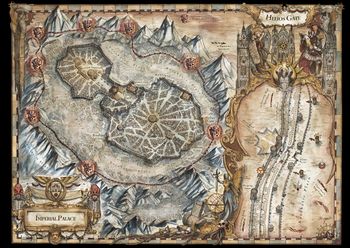 The Imperial Palace as it appeared during the Horus Heresy 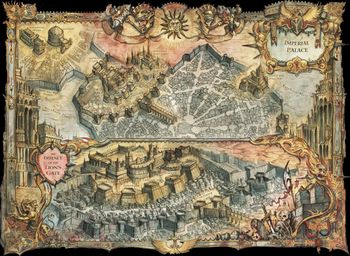 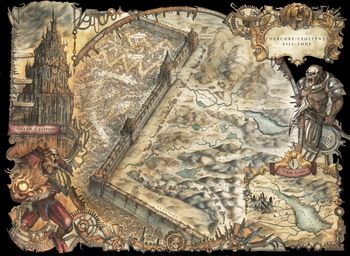 The Mercury-Exultant Killzone during the Siege of Terra[30]

Notable Areas of the Outer Palace

The Inner Palace is the massive complex at the heart of the Palace built over the ruins of Kathmandu[16a]. The Inner Palace's security is the exclusive domain of the Adeptus Custodes.[19a] 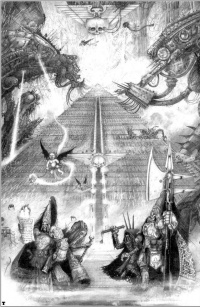 Notable Areas of the Inner Palace 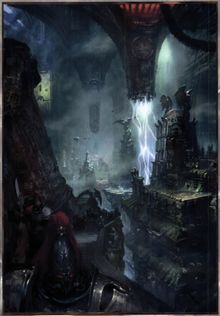 Beneath the Imperial Palace[32]