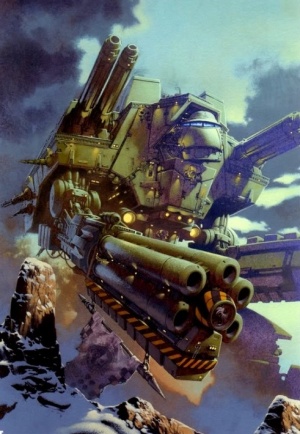 Imperial Titans are the colossal god-machines of the Adeptus Mechanicus's Collegia Titanica.

The Imperium's Titans are mechanical, humanoid-shaped war-machines; some Titan classes reaching up to a hundred feet in height. Their presence inspires nothing but terror - few enemies can stand against them - and only another Titan can equal their power. It is thought that the first Titans were developed on Mars during the Age of Strife in order to combat the Cy-Carnivora.[9]

A human pilot, linked directly to the machine via a Throne Mechanicum, controls the movement of a Titan merely through thought. Titans are powered by plasma generators, as nothing else can provide the vast amount of energy required. Energy fields known as void shields are the Imperial Titan's first line of defense. The shields can absorb incoming damage until becoming overloaded. A Titan's limbs move using electrically-motivated fibre bundles which act as synthetic muscles.

Imperial Titans are transported world to world by Mechanicum-operated Conquesitus Arks and Heavy Transports[4] and landed via Drop-vaults.[5]

Titans are divided into a number of general types depending on their size and function. The Battle Titans are the most numerous and general type. Widely varying in size, they stand between 40 and 80 feet in height. Some types of Battle Titan have been built by the forces of Chaos over the years since the Heresy, or have been corrupted from their original design. These Titans are unique to the forces of the Traitor Titan Legions.

Each general type of Titan is further divided into classes. The most basic class of Battle Titan is the Warlord. Finally, each class has a number of variants, determined by the weapons it mounts.

Each Titan is manned by a crew consisting of a single Princeps in command, assisted by Moderati, a Tactical Officer, a Chief Engineer, an engineering crew, and Servitors. The number of each is dependent on the type of Titan.

A Princeps commands his Titan through the MIU link to the Titan's "spirit," controlling the Titan's movements through his thoughts. The Titan becomes an extension of him; when damaged he feels pain; when victorious he feels elation. This link grows so strong that his mental health will slowly deteriorate when unlinked. Because of the immense power of a Titan's spirit, the Princeps must also possess the strongest of wills to survive such a link. He can assume direct control of any system, though it is usually aiming and fire control that is taken. Regardless, Titans must have both Princeps and crew to function. The Princeps' relation to the Titan is similar to that of a Space Marine within a Dreadnought; however Titans eventually form their own minds from centuries of experience. The link in some cases gets so strong that the Princeps becomes physically-integrated into the Titan, and cannot be removed until they die.

Imperial Titans mount enormous complex weapons, from rapid-firing cannons that hurl a torrent of shells to sophisticated laser weapons to plasma weapons that unleash barely controlled energies. Each are capable of mass destruction that would devastate armies.[1a]