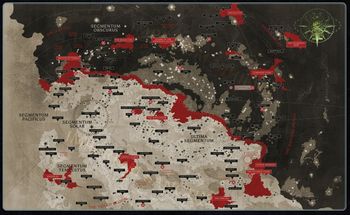 Imperium Nihilus, also known as the Dark Imperium, is a newly formed region of Imperial territory encompassing much of Segmentum Obscurus and Ultima Segmentum.

The Dark Imperium is a region of space that became isolated from the greater Imperium, now known as the Imperium Sanctus,[4] due to the formation of the Great Rift at the end of the Thirteenth Black Crusade. The "Dark Imperium" is aptly named, for here the light of the Astronomican is obscured, travel is extremely dangerous, Astrophatic communication is difficult, and many enemies of Humanity besiege its remaining isolated worlds. Though Imperium Sanctus suffers from a myriad of problems and threats, they pale in comparison to those of Imperium Nihilus.[7a] Chaos fleets and warband in particularly reave with near-impunity, new Daemon Worlds allow for Daemonic armies to roam freely, and many of the isolated Imperial worlds in this blighted region believe themselves the last outpost of mankind. Many of these worlds have essentially seceded from Imperial rule, establishing themselves as petty kingdoms. It is not uncommon for these small palatinates to fall under the sway of Chaos armies. It is doubtful that even Abaddon himself is aware of every such sovereign empire spreading beyond the influence of the Imperium, though rumors are abound that he is guiding them.[9]

Travel across the Great Rift to the Dark Imperium is said to be difficult to nigh-impossible.[1] A stable route, known as the Nachmund Gauntlet was eventually discovered and is now one of the most strategically vital regions of the Galaxy. Until the Indomitus Crusade, it was not even clear to the Imperium if anything remained alive on the other side of the Rift.[8] Lord Commander Roboute Guilliman has declared that one of the aims of the Indomitus Crusade to be the liberation of the stranded worlds within Imperium Nihilus.[2]

The current Regent of Imperium Nihilus as declared by Guilliman himself is Blood Angels Chapter Master Dante.[3]