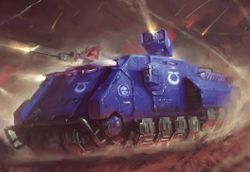 The Impulsor is a newly unleashed grav Tank transport, that is used by Primaris Space Marines.[1]

The Impulsor is a lightly armored and fast-moving assault transport favored by Vanguard Space Marines. Benefiting from the same advanced gravitic-impulsion technology used by Repulsors, the Impulsor boasts vectored thrusters that give the vehicle a large degree of speed. Its open-backed design allows it to transport a squad of Space Marines directly into battle, entirely by bypassing obstacles such as trenches, river deltas, toxic runoff, and the like. Typically, these vehicles are saved for the delivery of the killing blow by Vanguard forces, or else employed in a similar capacity to the Rhino by Primaris forces who wish to deploy mass armored columns or perform rapid flanking maneuvers.[2]

As befits a vehicle that is often its squads only support in hostile territory, the Impulsor can be rapidly refitted with a variety of weapons and defensive systems. These include an advanced shield dome atop its hull that sheathes its in a shimmering refractor field. Forward reconnaissance missions see it use envoy-class vox and auspex arrays, while those squads requiring additional fire support can call upon the Bellicatus Missile Array or twined Icarus Ironhail Heavy Stubbers.[2]