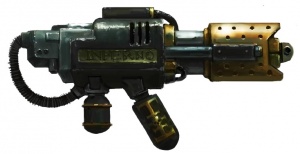 The Incinerator is a weapon crafted exclusively on the moon of Deimos by the Adeptus Mechanicus Tech-artisans, created and designed specifically for the Grey Knights. It has many of the same characteristics as the Heavy Flamer used by many other Imperial forces but is fueled by psyflame, a special mix of psychically-charged consecrated promethium and blessed oils which can bypass any protection granted by psychic powers or sorcery. Burning azure and brilliant white with pure faith, and hotter than any regular fire, the flame is especially effective against daemons; even moreso if the bearer is a psyker himself and is able add his own power to strengthen and direct the jet of fire.[1][3][4b]

After witnessing the terrible power of their allies' weapons, the Inquisitors of the Ordo Malleus sought to obtain a smaller, human-sized variant of the Incinerator for their own use. Akin to a regular Flamer, this version is bestowed to the Inquisitorial Pyroclasts, and can be found in the hands of the Ecclesiarchy as well. Most of those are kept in the armouries of the Convent Sanctorum, but a rare few have been given to the most ardents of Missionaries to help them purge those who would refuse the Imperial Creed.[3][4a]

Heavy incinerator, a bigger version of the weapon found exclusively on the Nemesis Dreadknight.