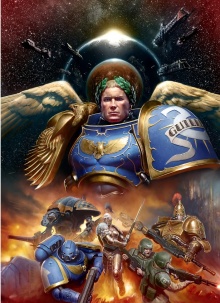 The Indomitus Crusade is a Crusade that was launched by the resurrected Primarch Roboute Guilliman, after he declared himself Lord Commander of the Imperium's armies during the Thirteenth Black Crusade[1]. The main aim of the Crusade is one of reconquest, as Guilliman intends to liberate those Imperial worlds embattled by the forces of Chaos following the creation of the Great Rift, which has divided his Father's Empire in half.[2] The undertaking of Indomitus Crusade was so grand that it echoed the Great Crusade of old.[6]

It was not until Guilliman departed from the Throneroom of the Imperial Palace after meeting with the Emperor that he declared the need for the Indomitus Crusade, leaving some to speculate it was the Emperor's will as opposed to his own[7]. Resources for the Crusade Fleets' muster came from many worlds capable of producing vast material output. Terra, Mars, Jupiter, Armageddon, Bastrophol and Shenjin are known to have taken part in this endeavor. Military forces meanwhile, were garnered through withdrawing forces from Imperium Sanctus Systems left untenable due to the impact of the Great Rift. This process spawned a great deal of resentment, however, and several mutinies were done by forces unwilling to abandon their posts. In the end though, the withdrawals succeeded in providing vast numbers of warriors and war machines, for the growing Crusade fleets. These fleets would take shape in several Systems, including Sol and Gehenna.[16]

Guilliman's forces consist of troops from over a dozen Space Marine Chapters led by the Imperial Fists. These are joined by Imperial Guard, Mechanicum, Custodes, Sisters of Battle, Imperial Navy, Skitarii, Legio Cybernetica, Collegia Titanica, Knights, a small contingent of Sisters of Silence, and the newly created Primaris Space Marines created by Archmagos Belisarius Cawl.[3] With the Astronomican in a state of disarray due to the formation of the Great Rift, the Indomitus Crusade risked only short jumps through the warp.[5] One of the earliest known actions saw the Grey Knights cleanse Jupiter's moon of Ganymede of Daemonic taint, subsequently transforming it into a major Hub-Fortress for the Crusade.[9] The earliest goal of the Imperials in the first months of the Crusade was the recapture of Warp Nexuses around Terra, such as those at Vorlese. Eight of these Nexuses were assailed by the forces of Abaddon, who sought to isolate the Throneworld. As the Imperials struggled to retake the nexues, the Crusade was forced to instead take more dangerous and time-consuming warp routes.[19]

Guilliman's initial plan called for Fleet Tertius under Fleetmaster Cassandra VanLeskus to capture the world of Olmec in Segmentum Solar while Fleet Quintus under Fleetmaster Tronion Prasorius moved into southern Segmentum Solar towards Lessira. Meanwhile, Fleet Secundus would direct itself towards the Eye of Terror and the remains of Cadia. The primary mission of this campaign was to distract the forces of Abaddon while Fleets Tertius and Quintus undertook their own objectives.[19] Only when Quintus had retaken Lessira and Tertius Olmec would Guilliman deploy his own personal Primus towards the embattled world of Gathalamor. However this plan rapidly fell apart as Fleet Quintus became plagued by logistical issues, disease, and sabotage. Moreover Chaos forces emerged from the Eye of Terror to attack the vital world of Hydraphur, forcing Fleet Tertius to divert course from Olmec and instead aid the Segmentum Fortress. Guilliman was rapidly forced to rewrite his entire strategy.[19]

In the revised plan the first fleet to see action was Fleet Tertius under Fleetmaster Cassandra VanLeskus, which took Olmec[19] and battled the Khornate Crusade of Slaughter in the Sol System. The fleet continued on into Segmentum Pacificus and then arced into Segmentum Tempestus.[7] Fleet Secundus set out next, its ranks spearheaded by the Battle Sisters of the Order of the Ebon Chalice and the Order of Our Martyred Lady and engaged the forces of Chaos in Segmentum Obscurus in a campaign dubbed the Road of Martyrs. Fleet Primus under Guilliman himself left the Sol System third, taking with it the largest compliment of Ultima Founding Primaris Space Marines of the Greyshields as well as Belisarus Cawl aboard the Zar Quaesitor. It set out not upon a single heading but instead diverged into several spearheads that further fractured as they spread out from Terra. Wherever the Battlegroups of Fleet Primus surged into the fight they drove back the hordes of heretics and xenos that threatened to overrun Mankind. The first major victory of Fleet Primus would come at the Battle of Gathalamor. Fleet Quintus was eventually able to depart, but was beaten to the prize of Lessira by the lead elements of Fleet Tertius.[19]

Of all the Indomitus Crusade Fleets, Fleet Septimus (the 7th) alone was commanded to gather far from the Sol System. The exact location of its mustering point was kept a heavily guarded secret, known only to Roboute Guilliman himself and his inner circle. How large or small those battlegroups were, what forces were assigned to them, and what Fleet Septimus’ veiled purpose might be, none could be sure. Those assigned to the seventh fleet simply vanished, leaving nothing behind them but dark speculation and persistent rumors of onyx-chased servo skulls that drifted through the shadows clutching high level-clearance data scrolls in their metallic claws.[7]

Gaining momentum, the Indomitus Crusade pushed a path through system after system. Daemon hordes were driven back from Gathalamor, the Drogos System and Tallarn. In the Lhorm Reaches, the Brass Tyrant was defeated. The entire population of Ophelia VII was freed from the enslavement of the Tyrant of Blueflame, although the Greater Daemon escaped. Word of the crusade's approach alone was enough to quell the rebellion on Necromunda. By the time the Crusade reached Catachan, all of the Chaos forces had already been defeated by the local Catachan Jungle Fighters Regiments. At Catachan, the Crusade halted for reinforcement and resupply and, despite heavy losses, the Indomitus fleet was larger when it departed Catachan than it had been when it first left Terra. As the Indomitus Crusade worked its way outwards from Terra, the worst effects of the Great Rift were already lifting across many sectors. Although warp storms still drifted out of the Great Rift, the Astronomican was slowly burning away the taint of the warp throughout the galactic south. Many citizens that survived the cruel oppression of daemonic hordes saw divine correlation between the two events. Those that glimpsed the Primarch firsthand whispered that they had seen the Emperor himself. Word of the Primarch erupted across the galaxy, revitalizing the Imperium's morale.[5] 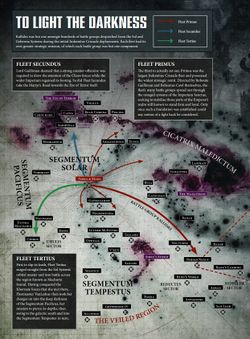 However, the crusade came to many worlds that were beyond saving and suffered setbacks. Where there was no hope, Guilliman sought instead to bring vengeance and Exterminatus, as was the case with the Hive World Bhundar and the Daemonic-corrupted Cardinal World of Gloriphia. At Terra Secundus, the Crusade fleet suffered ambushes and catastrophic malfunctions, having been lured into a terrible trap by the Alpha Legion. Although it pained him to do so, Guilliman made the difficult decision to pull back, skirting the whole Primagenesis System, as he could not afford to become bogged down in a long war of attrition. The crusade's journey later saw it encounter dozens of systems in which countless Imperial citizens were left in thrall to the Chaos Gods. This was a bitter reality for Roboute Guilliman and his forces.[5]

As the Indomitus Crusade penetrated deeper into the galaxy, Archmagos Cawl kept his automaton workers on overdrive to create new Primaris Marines and the weapons for them. Aboard the massive vessel Zar-Quaesitor, thousands of Primaris Space Marines – some comprising entirely new Chapters and others designated as reinforcements for existing ones – were awakened out of stasis and made ready to join the fray. On Rynn's World, the arrival of the Indomitus Crusade broke the daemonic legions of the Daemon Prince Rhaxor. After the battle, the stunned Crimson Fists were given reinforcements of Primaris Marines. For his raw material, Cawl had selected warriors of Terra, and had taken them only a few generations after the original Imperial Fists had been created by the Emperor. Indeed, some had been held in stasis since the days of the Great Crusade; a few of the Primaris Space Marines could recall having seen Rogal Dorn himself. Such reunions were repeated on Baal, Chogoris, and throughout Ultramar.[5]

After around 12 years[18], the first phase Indomitus Crusade began to end and the Unnumbered Sons were finally broken up. When the vast holds of the Zar-Quaesitor were emptied, Archmagos Cawl departed, for he had many more secret vaults to activate in order to complete the Ultima Founding. Once deployed, new Chapters remained after the initial conflicts were won, seeking to consolidate the crusade's gains. In many cases, they did this by establishing their own new Chapter planets. In this way, the crusade not only freed worlds from the tyranny of the Dark Gods, but also strengthened their defenses against further attacks that were sure to come.[5] After hearing of serious developments in the Plague Wars of Ultramar, Guilliman could no longer ignore his home and decided to return to Ultramar. After the Battle of Raukos Guilliman held a great Triumph and announced the dispersion of the Crusade throughout the Imperium.[4]

Notable Battles of the Indomitus Crusade 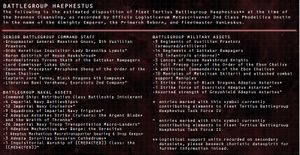 Despite being under the overall command of Roboute Guilliman, the Indomitus Crusade did not operate as a single force. Rather, it was a massive ever-growing fleet divided into many formations that varied greatly in size and makeup. Each of these Fleets had their own Space Marine, Imperial Guard, Imperial Navy, Adeptus Mechanicus, Sisters of Battle, Sisters of Silence, and Adeptus Custodes detachments. Supporting these were support groups from the Adeptus Arbites, Inquisition, Officio Assassinorum, and Ecclesiarchy. The Fleets were identified by number, such as Fleet Primus, Fleet Secundus, Fleet Tertius, and so on and fell under the command of a Fleetmaster.[7] There are currently 10 known Battlefleets, each of which is massive. The size of Fleet Primus alone surpasses that of all Imperial forces gathered in the Macharian Crusade.[15c]

Each of these fleets was in turn divided into a number of Battlegroups, identified as Battlegroup Alphus, Battlegroup Betaris, Battlegroup Cerastus, etc. each under the command of a Groupmaster. Though each battlegroup was part of a greater fleet, they were designed to be independent and self-sufficient. Battlegroups would answer to their corresponding Fleetmaster for strategic direction, but otherwise investigated and initiated their own campaigns. The third level of the Crusade was the Task Force, which were specialized military groupings that were assembled on the order of a Groupmaster. They were intended to achieve the conquest of specific worlds or defense platforms, the couriering of vital messages through the vastness of space, the destruction of specific enemies who had been marked for death, and whatever other important tasks had to be achieved. Each Task Force had within it a specialized force known as Torchbearers. This consisted of Sisters of Silence, 1 squad of Custodes, and a conclave of Magos Biologis. These acted as the direct emissaries of Guilliman and would transfer new Primaris Space Marine technology and Gene-Seed to cutoff Space Marine Chapters.[7]

Each Indomitus Crusade Fleet was initially organised right down to a regimental level by Roboute Guilliman. However, the Primarch had to accept that his painstaking organisational work would not long survive contact with the war-torn galaxy. He thus provided fleetmasters and groupmasters alike with powers of requisition to rival those of even the most domineering Lord Inquisitor. To facilitate and resupply this great undertaking, Guilliman created the Officio Logisticarum.[7] The Officio Logisticarum itself is based out of Hub-Fortresses, which are periodically established on worlds in the wake of the Crusade.[9]

Ten Crusade Fleets are known to exist[15d], given the designation:[11]

Originally as outlined in the Dark Imperium novel series, the Indomitus Crusade lasted roughly 100 years and ended with the Plague Wars. However in 2021 Black Library retconned the events of the novels to take place only 12 years after the Crusade had begun and no known end-date is currently set.[18]