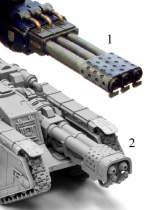 The Inferno Gun is a massive Flame weapon designed to be mounted on Imperial Titans and other Super-Heavy Vehicles.[1]

It is composed of several linked barrels firing highly flammable chemicals in massive waves of flame. It typically uses Promethium for this task, which is stored in multiple parts and pumped independently into a mixing chamber just behind the barrel to create a chemical "jelly." This jelly is then compressed and released as a jet of flaming mass which sticks to any surface.[1] This massive gout of sun-fire can melt stone and concrete, causing buildings to collapse in on themselves, and even liquidate Power Armoured infantry.[2] It can also effectively clear minefields as the sudden heat detonates their fuses on contact.[1]

The Inferno Gun can be fitted to the limb mounts on Warhound Scout Titans,[3] as well as the carapace mounts found on Reaver[4] and Warlord Battle Titans.[3] They can also be found on the carapace mounts of some Imperator Titans.[5] The Imperial Guard Malcador Infernus super-heavy tank also mounts an Inferno Gun as its main armament, though it must tow its Promethium fuel in a separate trailer.[1]