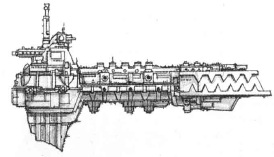 The Infidel's design originated from the Monsk orbital shipyards in an effort to provide a larger version of the Cobra Destroyer, which disappeared in late M40. A few years later, a series of attacks against Imperial outposts and convoys by ships bearing similar design to the escort ship were reported. As time passed, the area of these attacks grew wider as raiding fleets were reported in Segmentum Obscurus and Segmentum Solar.[1]

Imperial efforts to reconstruct the stolen plans resulted in the development of the Falchion Escort class. In 938 or 939.M41, the two "sister" classes (the Falchion and the Infidel) would confront each other for the first time in a naval battle over Sabatine.[3]

For combat, Infidel vessels are equipped with Torpedo tubes and Weapons Battery.[1]