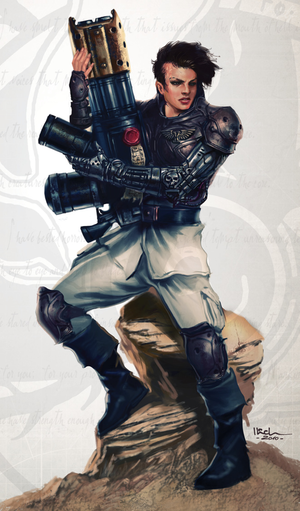 A Pyroclast equipped with an Astartes Incinerator

Pyroclasts are specialist troops used by the Ordo Malleus and Ordo Xenos.[1]

The original Pyroclasts were created by Inquisitor Malachai Heritor of the Ordo Xenos in 643.M40, as the last measure to end xeno infestations through holy fire when everything else had failed. Their success led to their adoption by the Ordo Malleus.[1]

The first recorded use of the Pyroclasts was the Cleansing of Dreah. After discovering that the grain tithe of the Agri-World had been tainted by Chaos, Inquisitor Helden Karros equipped three Imperial Guard Regiments with flamers and ordered them to cleanse all vegetation within a thousand kilometre radius of the original infection site.[1]

Afterwards, the Calixian Ordo Malleus created a training bastion on the Shrine World of Reshia for inquisitorial agents to specialize in the use of Incinerators. Most trainees are experienced guardsmen possessing an instinctive understanding of the nature of fire, cultivated into a religious love and faith during a six months training period before being returned to their inquisitors as fully fledged Pyroclasts.[1]

Another similar training facility is located on Idumea.[1]