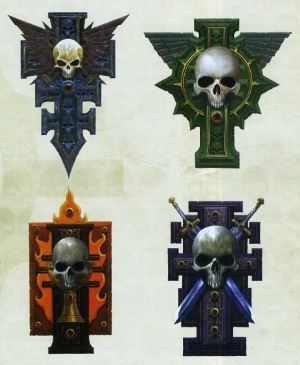 A variety of Inquisitorial Rosette designs.[1]

Inquisitorial Rosettes or simply Rosettes are the badges of office of Inquisitors. Ordinarily Rosette badges consist of a crimson sigil that may be further inscribed with the mark of the holder's Ordo. Inscribed with verification technology and coded encryption to prevent forgeries, Inquisitorial Rosettes are usually personally stylized and designed. The Rosettes give the holder immense power, capable of conscripting any Imperial citizen or force for their own personal needs and even holding the power of life and death of worlds in their hands through the power of Exterminatus.[1]

The title 'Rosette' stems from the hunt of Severian of the Luna Wolves through the streets of Terra during the Horus Heresy. Nagasena, a samurai of Terra tracked the loyal Luna Wolf through the streets of the Petitioner's City. Nagasena happened upon a young woman, Ecarter, who had seen the Space Marine ambush a squad of Arbitrators. Visibly shaken, the young woman was reluctant to give any information away but eventually told Nagasena what direction she saw the Luna Wolf head in. Thanking her, Nagasena gave her a jewel encrusted amulet and told her to go to his estate and stay there as an honored guest. Grateful of the chance to get out of the Petitioner's City, Ecarter gave Nagasena the carnation from her dress, pinning it to his breast-plate and calling it a 'Rosette for luck'. Nagasena would later be recruited by Malcador as one of the first Inquisitors.[2]