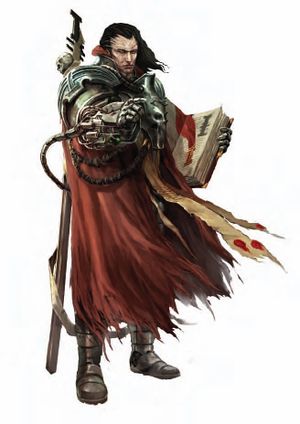 An Interrogator is an Acolyte of the Inquisition, acting as their Inquisitor's apprentice.

Few Acolytes are granted this privilege, which is often only given after many decades of service. Some serve independently from their master in groupings with other Acolytes, while some others accompany their master in his Inquisitorial duties. At some point, his or her master may recommend to the Ordos of the Inquisition to advance the Acolyte to full Inquisitorial rank. After this, the Interrogator is a full Inquisitor and begins his own agenda and operations. Although the former Interrogator is no longer bound to his old master, the two will have formed a bond and may work together and help one another in the future.[1]

Some apprentice Inquisitors start at the rank of Explicator, where they learn how to extract information using torture under the direction of their mentor Inquisitor. Explicators then move up as more experience is gained in the ways of the Inquisition to the rank of Interrogator.[2]

Earlier books used the term 'Acolyte' to cover the ranks of 'Explicator', 'Interrogator', and the unexplained 'Notary' only.[2] Later books, following from the Dark Heresy RPG, have been clear that Acolyte covers a wide variety of Inquisitorial henchmen, and that apprentice Inquisitors are 'Interrogators'.[3]