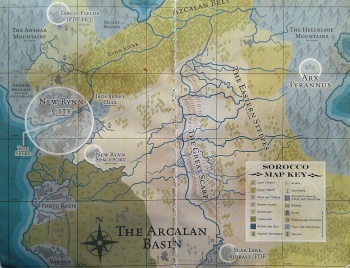 In the year 988.M41, Rynn's World, the homeworld of the Crimson Fists Space Marine Chapter was invaded by a massive Ork Waaagh!, commanded by Snagrod, the Arch-Arsonist of Charadon[1] as a part of his main attack of the Loki Sector. Although the battle ended in an Imperial victory, the consequences were devastating; more than three-quarters of the Chapter was lost, and the Crimson Fists' fortress-monastery, along with its reserves of gene-seed, were destroyed - a blow the Crimson Fists have been struggling to recover from ever since.[Needs Citation]

When the Orks invaded Badlanding, The Planetary Defence Force, consisting of the 18th Mordian, 24th Lammas and 49th Boros Imperial Guard Regiments, commanded by Commissar-General Alhaus Baldur are defeated within days. In retaliation, the Fourth Company of the Crimson Fists assaults Badlanding. The Crimson Fists underestimated the size and strength of Warboss Uzrog's forces. The result is a failed attack on Warboss Uzrog's warband with the loss of 56 Space Marines out of a company of 84, with Captain Drakken among the fallen. Shocked by the failure of the Fourth Company, the Crimson Fists indefinitely suspended all raids and order a recall of all the chapter's companies to Rynn's World.[Needs Citation]

The Crimson Fists promptly organized their defenses at Rynn's world, believing that a counter-invasion by the Orks was unavoidable. However, their orders for the world's PDF to mobilize were only carried out slowly, as Rynn's World elite mostly believed that the Orks either would never attempt to attack their planet or that the invasders would be swiftly defeated by the Space Marines anyway.[7a]

Ork assault and destruction of the Arx Tyrannus

The intial Ork attack was swift and overwhelming, as a massive Xenos armada left the Warp close to Rynn's World, quickly destroying the Imperial fleet and the planet's orbital defenses. Only a single, damaged Crimson Fists ship was able to break through the Ork fleet, escaping from the system to call for aid.[7a]

Warboss Uzrog then attacked Rynn's World directly and during the Orkish invasion, there was a trillion to one malfunction in the Arx Tyrannus' surface-to-space defence system, causing a missile to fly off course and hit the main arsenal of the fortress-monastery, the Arx Tyrannus. The ensuing explosion devastates the Crimson Fist's fortress-monastery and almost wipes out the entire Chapter. Two groups of Crimson Fists did survive; the first were marines surveying the outer defenses with Commander Pedro Kantor. These joined up with the second group, who were seconded to New Rynn City's defence forces, and the surviving Crimson Fists stayed in New Rynn City to hold out against Uzrog's siege. As a result of the Ork invasion all of the planet's cities were destroyed, with the sole exception of New Rynn City; the capital and seat of the planetary government.[Needs Citation] However the Crimson Fists and Rynnsguard managed to continue to resist the Greenskins, most notably from the Silver Citadel of New Rynn City, which endured 563 days of hellish siege. Snagrod eventually grew tired of the war and left for carnage elsewhere in the Sector, but substantial Greenskin forces were left behind.[7]

The Rynn's World Air War refers to the aerial campaign of the Invasion. This theatre saw Imperial Navy and Rynnite PDF squadrons duel for control of the skies with their Ork counterparts. These aerial forces had only minor support from the Crimson Fists own aerial elements after the destruction of the Arx Tyrannus and for 18 months were forced to defend the skies over New Rynn City, protect their last spaceport, attack Ork landing zones, and protect vital shipping lanes over the planet's scattered islands on their own. The air defenses of the planet were quickly silenced by the Orks and it fell to Imperial Navy pilots to combat Greenskin flyers. These forces were commanded primarily by the Governor of Rynn's World, Maia Cagliestra and General Saedus Mir.[7a] The Imperial Navy Air Wings took horrific losses during the war and lost most of their air superiority, but never abandoned the fight. They were eventually reinforced by fresh Squadrons when the Imperial relief fleet arrived.[7b]

Ultimately after 18 months of battle, Rynn's World salvation arrived in the form of Imperial reinforcements under the command of Lord Admiral Galtaire. By then, the bulk of Waaagh! Snagrod had been broken upon the world and moved on, but the planet was still swarming with Greenskins. The relief fleet consisted of not only Imperial Guard and Imperial Army forces but also Imperial Fists, White Scars, and Dark Angels Strike Cruisers as well as other Space Marine Chapters.[7b]

The key battle of the reclamation was the recapture of Rynn's World primary spaceport in order to bring down Titans, the only true counter to the Ork Gargants. Pedro Pantor led the remaining elite of his Chapter in a ground assault against the Spaceport, personally challenging the Ork warboss Urzog. This was launched simultaneously with an orbital strike and aircraft assault by the newly arrived Imperial reinforcements.[7b] The Imperials were successful, and subsequently Rynnsguard Bomber wings slowed an attack on New Rynn City by Greenskin Gargants. The Gargant were able to penetrate the defensive line around New Rynn City, Zona Regis. From the Silver Citadel Governor Cagliestra and her Generals commanded the defenses, using Marauder Bombers to bring down the Void Shields of the Ork Titans. While the Imperial Aircraft were almost all destroyed, they slowed the Orks enough to allow Imperial Titans to land and counterattack. The Silver Citadel withstood 563 days of siege.[7c]

Over the following months the Imperial forces launched a general counterattack across the planet, with the Fists determined to capture the ruins of the Arx Tyrannus. By 991.M41 most of Rynn's World was back in Imperial hands, with Ork resistance restricted to the wilderness and isolated islands. One of the final major assaults saw Commissar-General Mordrid Van Horcic attack the Ork defenses in a region nicknamed Desolation Valley under the control of Warboss Votzug. During the air campaign over Desolation valley, a rivalry erupted between Imperial Ace Richter Dagor-Jarni and a Greenskin pilot known as Da Black Barun. The two eventually dueled each other to stalemate before Jarni was forced to escape due to a Greenskin ambush. This battle was waged simultaneously when Imperial fighter wings over Sulphur River were forced to repel Grubnatz's Bommer attack.[7d]

Following the Imperial victory at Desolation Valley, Snagrod was forced to return to the Rynn's World warzone after receiving news from Mekboss Votzug's new beacon. Recognizing the threat, Pedro Kantor led a Space Marine and Imperial Guard attack to destroy the beacon at Blackreef City. However they were too late as a massive Rok armada appeared in orbit and began to bombard the planet. Ultimately Wing Command El Oran led a desperate Lightning attack on the Beacon, destroying it and throwing many of the Roks off course. Snagrod's personal Rok was destroyed but the Warboss went missing after the war, making it unclear as to what happened to the Arch-Arsonist.[7e] For the Adeptus Terra, the destruction of Snagrod's Rok marked the official Imperial victory in the war; it declared Rynn's World liberated. In truth, significant Ork forces including groups equipped with heavy armour, large airforce squadrons, and nval fleets remained on the planet. Thus, the war factually continued.[7f] 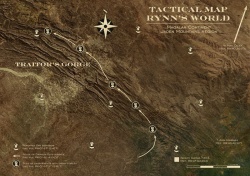 Tactical Map of the Battle For Traitor's Gorge.

The Battle For Traitor's Gorge is a lesser-known battle which took place on Rynn's World roughly six months after the planet was liberated. Several remaining Ork warbands had taken refuge in the Jaden Mountains of Rynn's World, conducting raids against the weary and war-torn populous. Chapter Master Pedo Kantor himself directed the campaign to eradicate the Orks, engaging them with his remaining Battle-Brothers in cave-to-carve fighting. However Kantor's attacks only served in uniting the disparate Ork warbands found in the mountains, and soon the Crimson Fists task-force came under sustained attack in Traitor's Gorge from every Ork in the area.[4]

Though but two dozen in number, Kantor and his men fought valiantly and took a heavy toll on the Orks. Managing to fight themselves clear of the gorge's confines and seeking higher ground, the Crimson Fists became surrounded and packed together but knew that with all the Chapter's Thunderhawks lost or damaged in previous battles, evacuation and air support was impossible. Soon only the Chapter Master himself remained unwounded. But when all seemed lost, the Ork tide began to slacken. Soon ghostly figures appeared on the ridges around Traitor's Gorge, gracefully assailing the orks with Longrifles and darting from cover to cover. For reasons known only to himself, Eldorath Starbane led a small contingent of Rangers from Craftworld Alaitoc to intercede on behalf of the beleaguered Astartes forces.[5] This timely intervention by the mysterious warriors allowed the Crimson Fists to turn the tide of the battle and the Crimson Fists surged forward, forcing the Orks to flee. With the mysterious ghost warriors vanishing, the Ork warbands in the Jaden Mountains were shattered after the victory.[4]