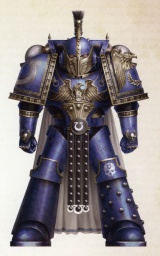 The Invictarii was an elite sub-formation of the Ultramarines during the Great Crusade and Horus Heresy.[1]

Consisting of hand-picked warriors, its most famous sub-formation was the Suzerain Invictarus. These warriors acted elite honor guard of the four Tetrarchs of Ultramar and best symbolized the ideals of Roboute Guilliman.[1a] The Suzerain Invictarus functioned as both a military force and arbiters of law for the populations they oversaw. The individual size of Suzerain Invictarus units varied, with Tetrarch Stolos Amyntas maintaing thousands as feared peacekeepers on Iax while Tetrarch Eikos Lamiad had but 100 in his personal guard.[3]

The ranks of the Invictarii were made up of the finest warriors of the Legion and many future Ultramarines officers were drawn from its members. Selection into the unit was seen as a mark of a potential future in high command.[3] Their Legatine Axes were once symbols of the battle-kings of Macragge.[1b]

Besides their official duties, members of the Invictarii could be found in limited numbers spread out throughout veteran Legion units and stratas of command.[3] 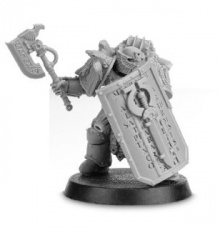