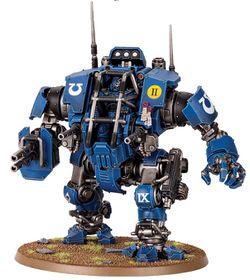 The Invictor Tactical Warsuit is a lightly armoured walker that is often found fighting alongside Vanguard Space Marines on recon missions. It is designed with sound-dampening materials, enabling the Warsuit to move at great speed with minimal noise output, in support of the the pilot's Vanguard brethren.[1]

The Invictor is a stripped-back variant of the Redemptor Dreadnought frame. Instead of an injured hero of the Chapter, the warsuit is piloted by a live Primaris Space Marine whose controls are directly plugged into his Power Armour. The pilots are chosen from those warriors who display an aptitude for swift and independent though, and protective stance towards their battle-brothers. These qualities are essential, for while an Invictor pilot has no additional authority, they are permitted a great deal of tactical autonomy. Most Invictor pilots seek to support and defend their comrades against particularly large and deadly threats, spearhead assaults against heavily defended positions, or form a bulwark against enemy forces. In practice however Invictor suits are deployed in every capacity, from armored escort duties to close-range siege-breaking and urban monster-hunts.[1]

The most iconic role for these walkers is supporting Vanguard Space Marine forces. Their reactors and servos are rigged to run with minimum sound, and their weapon loadouts allows for them to unleash firepower from either twin ironhail Autocannons or a compact Incendium Cannon. While they remain at range, each Invictor's servo-fist can use a modified Heavy Bolter that acts as an oversized sidearm. As the foe draws close, the pilot mag-locks the weapon to the machine's hip so that it may use its claw for melee battle. This combination of mid-to-close-range firepower, armored resilience, and selfless mindset proves do provide exceptional support to Vanguard forces.[1]