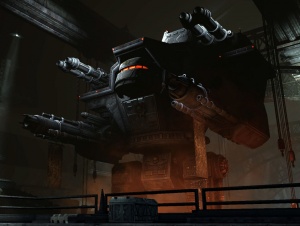 The Invictus is a Warlord Titan that was used to defeat a Chaos invasion during the Imperium's defense of the planet Graia.[1]

The planet Graia was attacked by a massive Ork Waaagh!, led by Warboss Grimskull. The orks attacked Manufactorium Ajakis, storing the Invictus, with the intent to capture and use the Titan for their own purposes. The orks killed the vast majority of the Invictus' support crew before they could make it to the Manufactorum, preventing the Titan from being utilized in the defense of the planet. The rest of the crew, including its Princeps, Enoch, were also unable to reach the Titan although they were unharmed.[1a][1b][1c]

This was until a force of Ultramarines were deployed to defend the manufactorum and the Invictus. The Ultramarines managed to fight their way through the ork forces and enter the manufactorum, including preventing the orks from using a stolen Volcano Cannon to blow open the building's gates. Once inside, they managed to secure the Titan against the orks, who had also managed to infiltrate the compound through the sewers. This allowed what was left of its crew reach the Invictus and partially activate the massive war machine.[1c]

While the crew were unable to bring the Titan's weapon systems' power online, this problem was solved when one of the Ultramarines powered one of its Volcano Cannons using an experimental weapon/power source recently created by Inquisitor Drogan. Using the power of the device, the Invictus was able to fire its cannon and destroy a distant spire that was being used to hold open a tear into the warp being used by the forces of Chaos. The usage of the power source caused most of the Invictus' systems to begin overloading, forcing an emergency shutdown, but no damage was sustained. [1c]