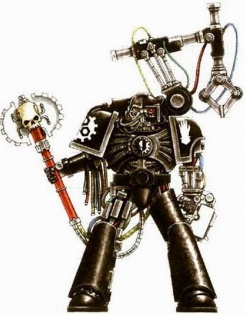 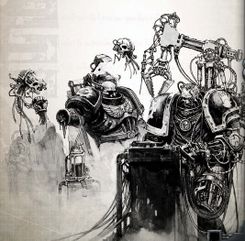 Iron Fathers are a rank within the Chapter of the Iron Hands combining that of Chaplain and Techmarine. They also are members of the Chapter's Iron Council, where precisely forty-one Iron Fathers sit.[1][2d]

The Iron Fathers are known to fuel the hatred and anger of the Iron Hands through the use of rousing speeches and oratories, which encourages their growth and intensity. Originally during the Great Crusade they were not members of the Legion at all, but rather engineer-mystics who maintained Dark Age of Technology machinery on Medusa. When Ferrus Manus took command of the Iron Hands the Iron Fathers were assimilated into the Legion and the rank was bestowed to Battle-Brothers. Since the Heresy, the Iron Fathers form the guiding voice of the Iron Hands and oversee both Battle-Brothers and the Chapter Armoury. They are usually heavily modified with Bionics, and are known for their stern resolve and disdain for weakness.[2]

Many Iron Fathers have once been Techmarines, but neither rank nor duty is a barrier to receiving this honor. The current Iron Council draws upon Chaplains, Librarians, Apothecaries, Techmarines, Veteran Sergeants, and even low-level Battle-Brothers to join the rank of the Iron Fathers. Every Clan Company has at least one Iron Father amongst its numbers, while most have many more.[8a]

During the Great Crusade, the Iron Hands were engaging a war of extermination against the Diasporex. One Iron Hand captain known as Balhaan failed in his duty in destroying a small fleet of theirs due to treachery on their path. Though Ferrus Manus was tempted to take Balhaan's head off for his failure, his Equerry advised him to instead place an Iron Father in joint command of the Ferrum as punishment.[3]