The Iron Knights are a Successor Chapter of the Imperial Fists.[3]

The Iron Knights are a crusading Chapter.[Needs Citation] They are one of the twelve Chapters that send a champion to the centennial Feast of Blades, and are the only Chapter to have won on two consecutive occasions.[3]

A number of decades before the end of M41 a group of Iron Knights known as the Iron Brethren turned to Chaos. The Chapter voluntarily began a penitent crusade to bring them to justice.[4][5]

The Iron Knights' homeworld, Seheris[Conflicting sources], is composed of harsh deserts and plains, divided between multiple tribes. As a Chapter, the Iron Knights treat War as a Sport, taking pride in testing their skills in harsh environments and pitting themselves against the most dangerous flora and fauna a planet has to offer as well as the various enemies of mankind.[6] 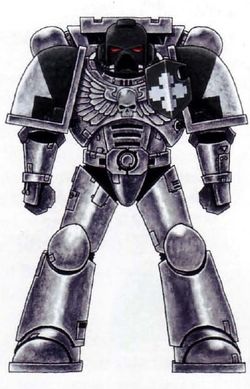 In the 5th Edition rulebook, the Iron Knights' homeworld is named Brycantia[1], while in Ben Counter's novel Phalanx, it is named Seheris.[6]