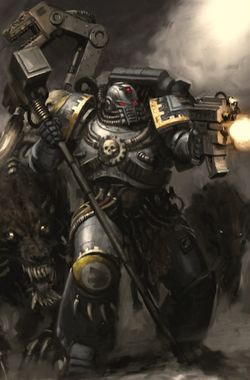 The Iron Priests are part of the Space Wolves chapter and their duty is that of a Techmarine but with additions.

An Iron Priest is required to keep the equipment of his Great Company in working order, maintain the machine spirits of its vehicles in addition to all other duties of a Techmarine. He is also required to tend to the spirits of the Dreadnoughts in the depths of the Fang, and it is his duty to rouse them from their deep slumbers if they are needed in battle.[1] Similar to their Techmarine cousins, Iron Priests usually pilot Space Wolves gunships and aircraft.[5]

Amongst the natives of Fenris, each tribe’s smiths will worship the Gods of Iron, legendary figures said to reside within the volcanic islands adrift in the Boiling Sea. A particularly gifted young Fenrisian smith may make a pilgrimage to the Isles of Iron, where they do indeed meet with living gods, for this is the guise the Iron Priests maintain when dealing with mortal men. Should a pilgrim pass the Test of the Iron Gauntlet, he may become an apprentice and be initiated into the Space Wolves. Later he will journey to Mars, the Red Planet, where he will learn the ways of the machine under the tutelage of the arcane and insular Adeptus Mechanicus. Only once he has fully embraced the mysteries of the Omnissiah will he be allowed to return to Fenris and take his rightful place amongst the Iron Priests, bringing growling engines of war to life in the service of his Chapter.[2]

Following the return of the new Iron Priest to Fenris his final test is undertaken. He places his right hand into lava as a sacrifice to the spirit of the Iron Wolf. Concluding this act the hand his replaced by a bionic replacement and their induction into the Iron Priesthood is complete.[6]