The Iron Snakes are a Space Marine Chapter. Their primary mission is the safeguarding of the area of Imperial space referred to as the Reef Stars[1], although they are also known to have contributed forces to wider conflicts, such as the Sabbat Worlds Crusade[2] and the Imperial response to the 13th Black Crusade.[6]

The Iron Snakes are a Second Founding Successor Chapter of the Ultramarines.[9] Their founder was Saur Damocles, Captain of the Legion's 6th Company during the Horus Heresy.[9] The current Chapter Master, Seydon, is the eighteenth to bear that title since the foundation of the Chapter.[1a]

The first-ever squad-leaders of the Chapter have become immortalized within its ranks, as their names have been retained as the official designation of the squads they first led. Every squad in the Chapter is therefore known by the name of its first commander and careful attention is paid to recording the deeds of each squad and the glory they have accumulated.[Needs Citation] Over the centuries, several squads judged to have accumulated particularly impressive and glorious histories became referred to as "Notable" squads and are seen as the pre-eminent units in the entire Chapter. There are at least five Notable squads within the Iron Snakes: Skypio, Parthus, Veii, Thebes and Damocles. Skypio is the senior squad of the entire chapter and is the closest thing to a Codex First Company the Iron Snakes could be said to have.

The Iron Snakes recruit from Ithaka, a world largely covered in very deep oceans home to a variety of sea-life, including the great Wyrms. Ithaka does possess significant landmass, including tropical islands and viciously cold polar regions. Iron Snakes are therefore able to train in a number of environments, although the sea is most precious to them, to the point where each marine carries a vial of Ithakan seawater with him when on active duty, and with which he anoints the soil of any other planet he steps on. Their actual Fortress-Monastery is located on Ithaka's moon, Karybdis, and features a great bell as large as a Space Marine Drop Pod.[1] 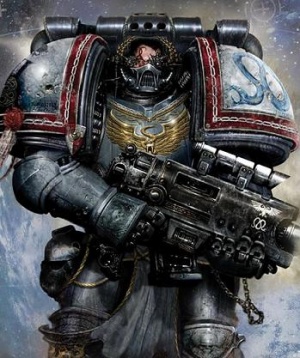 Detail of an Iron Snake.

The Iron Snakes appear to have been stationed in the sector of space known as the Reef Stars many thousands of years ago, and charged with its protection as their primary mission. The inhabited worlds of the Reef, while varied in their technological development, each appear to have some form of summoning aid from the Iron Snakes ritualized into their society. The Iron Snakes are a myth or legend to some worlds, an awe-inspiring reality to others. Regardless of how they are viewed, the Iron Snakes of Ithaka take their duty to the Reef Stars as seriously as only Space Marines can, and will go to any lengths possible to protect the sector and its citizenry.[Needs Citation]

The actions they have fought in the Reef Stars are numerous, as the whole area appears to be under constant threat by Dark Eldar raiding parties. As a result, the Iron Snakes have amassed considerable experience fighting these particular xenos, whom they (and the people of the Reef Stars) also refer to as the primuls.[1]

Other Battles and Campaigns

While the nominal fighting strength of the chapter (or "fratery" as it is referred to by the Iron Snakes) is kept at the Codex-approved 1,000 marines, the Iron Snakes do not appear to use the Codex's Company structure, instead basing their organization around that of the simple 10-marine squad.[1]

Each squad, named after its first-ever squad leader, is treated as an individual tactical formation held equal in placement in the line of battle with almost all of the other fratery units. Only those squads referred to as the Notables are seen as an elite, and even then the Notables do not properly represent a pooling of veteran Marines. This is due to the way in which the Iron Snakes field their new recruits. Recruits, referred to as "petitioners" with the chapter, do not appear to take to the field as Scouts; instead they operate as Chapter staff and personal servants for the full Battle-Brothers.[Needs Citation] When casualties incurred require the elevation of petitioners to the rank of full Marine, the petitioners try out for the positions by engaging their potential squadmates in single combat competitions. Winners of these competitions, or those judged particularly skillful by the squad-leader, are chosen to become full Brothers and fratery-members. Places in the Notables are competed for in the same way as in other squads, which means that the Notables are just as likely to have new recruits in their ranks as they are to have hardened veteran marines. Of course, the petitioners that manage to win a place in a Notable squad are likely to be the best of their generation.[Needs Citation]

When a squad is completely wiped out, it is reconstituted under the original name, with its new squad-leader being promoted from the ranks of the elder and more veteran Battle-Brothers of the other squads. Each squad-leader is expected to eventually nominate a successor from within his squad, who will be chosen to accompany him to officer-level briefings and take over command in the event of his death. This Brother will likely remain tied to his squad until his own death, as such 'seconds' are not promoted out to command other squads. Each squad will also contain a standard-bearer, who fixes the squad colors to a special mounting upon his armor, and a support weapons trooper (with the Plasma Gun and Flamer appearing to be Chapter favorites). The Notable squads also appear to customarily include an Apothecary as one of their number, and such specialist Marines are a common feature of other squads as well; the number of field-Apothecaries in the Iron Snakes appears likely to be higher than that of a Codex chapter.[1]

When a mission, referred to within the chapter as an "undertaking," is decided upon the Chapter Master announces how many squads he believes are required to ensure its success. All squad-leaders who wish to volunteer their units for the mission then place their tokens into a kylix (a form of drinking cup whose origins lie in ancient Terra). The Chapter Master then decides which squads to assign to the undertaking based upon which tokens he finds in the kylix.

Though the Iron Snakes are able to deploy an acceptable number of vehicles, and also include Dreadnoughts and Librarians amongst their forces, the primacy of the combat squad means that they concentrate on infantry tactics in battle. The Chapter armory is able to issue Combat Shields short-swords, and sealances (javelin-type fighting spears) to all brothers, enabling them to close up and use phalanx-style tactics. They are particularly skillful with the sea-lance, as part of a petitioner's training on their homeworld of Ithaka involves the hunting and slaying of the large, predacious sea-wyrms native to the planet.[1]

One of their unique battle practices is that they trained to use dogs in combat, especially in tracking and attacking Dark Eldar.[1]

While the squad is the principal tactical unit of the Chapter, sometimes even less manpower is deployed. In cases of responding to general aid requests from the worlds of the Reef Stars, it is customary to dispatch only one Battle-Brother from the closest squad to investigate. The Brother chosen is often either the newest member of the squad, or a member being considered for the role of successor by the squad-leader; a one-person undertaking is seen as a fitting challenge for such marines. Historically, only one warrior usually suffices in cases of general aid requests, though it is no shame for the individual to request the presence of his fratery-brothers once appraised of the specific situation.[1]

The Iron Snakes are unique in their Tactical squads in the fact that all squads are attached with an Apothecary unlike other codex Astartes who are assigned one per company.[1]

The Chapter's power armor is gunmetal and their symbol is a triple-hooped blue snake on a white background with thin red trim.[1] 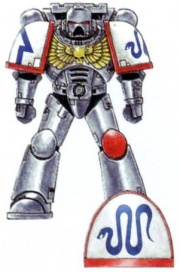