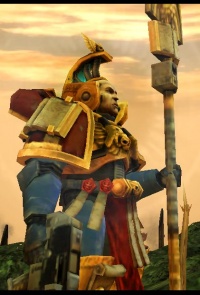 Isador Akios was a Librarian of the Blood Ravens chapter. He was a close friend of Gabriel Angelos, having served with him for countless years through battles of immense number. While his faith was considered pious beyond question, on the planet Tartarus, Isasdor would succumb to the lure of Chaos, although he thought himself righteous in doing so. Isador was frequently taunted by the Chaos Sorcerer Sindri Myr, who dared him to solve the riddle of the Maledictum, an ancient chaos artifact, and to battle Sindri himself. The urge for power overcame Isador, and he betrayed his Space Marine brethren, even Gabriel. However, he was not able to defeat Sindri, instead he was made to serve as yet another stalling device to prevent the Blood Ravens from disrupting the ceremony of sacrifice Sindri needed to activate the Maledictum. It was here that he met his end, defeated by Gabriel in combat, and then executed summarily by his old friend for heresy and treason.