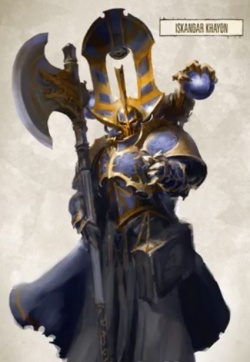 Iskandar Khayon is a Chaos Sorcerer, the Lord Vigilator of the Black Legion[3a], Warleader of the Kha'Sherhan, Third of the Ezekarion and a brother to Ezekyle Abaddon. To the Thousand Sons he is known as Khayon the Black, for his sins against his bloodline. The Black Legion call him Kingbreaker, the mage who brought Magnus the Red to his knees.[2a]

Born on Prospero, Iskandar lost his sister Itzara to a psychneuein attack. The larvae consumed half her brain before they were removed. Iskandar cared for her as best he could, but gave her to the Adeptus Mechanicus on Prospero for their anamnesis project. She was the first successful result of the project and was later installed in the Thousand Sons warship Tlaloc as its machine spirit.[2g]

During the Great Crusade, Khayon served in the 548th Expedition Fleet as a member of the Khenetai Occult and Order of the Jackal[5]. He suffered a brush with death while bringing Varayah to compliance. His drop pod was shot out of the sky and crashed in a harbour, killing five of his squad members. Iskandar was covered in burning promethium and his helmet had been ripped away, though he managed to survive.[2d]

Khayon slew the Space Wolf Eyarik Born-of-Fire in the Battle of Prospero by psychically dismantling him at the molecular level, taking his power axe Saern. His lost tutelary, Gyre, possessed Eyarik's Fenrisian wolf and has retained its form ever since.[2h] He was not among the 1,292 that Magnus brought with him to Sortiarius and spent an unknown amount of time barely surviving on the blasted surface of Prospero until he was found by Lheorvine Ukris of the World Eaters.[2e]

He later made his way to Sortiarius and opposed Ahzek Ahriman's spell to save their dying legion. As the Rubric began to fail, he created a portal with Saern to bring his men to the top of the pyramid, ordering them to kill Ahriman.[2h] Khayon failed to stop the spell, Sanakht parrying his axe to save Ahriman's life.[3a] Soon after, he left Sortiarius with a handful of brothers, including Ashur-Kai Qezremah and the Rubricae Mekhari and Djedhor, on the warship Tlaloc as the core of the Kha'Sherhan warband.[2b]

In his exile, Khayon became allies with a trueborn Dark Eldar scourge named Nefertari, binding her soul to her flesh after the greater daemon Zarakynel killed her but before it could consume her.[2i]

Khayon answered Falkus Kibre's call for aid in his search for the lost Vengeful Spirit.[2c] He helped Ezekyle Abaddon strike back at the Emperor's Children's Canticle City, destroying it by throwing the Tlaloc at it in the Battle of Harmony. In the final battle aboard the Pulchritudinous, Khayon fought Fabius Bile's clone of Horus, who crushed Gyre with Worldbreaker and shattered Saern. Abaddon arrived in time to save Khayon's life, killing 'Horus' with his own Talon.[2j] Khayon would later pledge his allegiance to Abaddon's Black Legion, becoming the third of the Ezekarion.[2a]

In the years after, known the the Ezekarion as the Illumination, the newly formed Black Legion ended the Legion Wars in the Eye. One by one the Primarchs bowed before Abaddon - with Magnus the Red having to be brought to his knees by Khayon.

Khayon acted as Abaddon's blade and assassin for many years, though he initially failed to kill Abaddon's rival Thagus Daravek. Khayon later recovered the mad prophetess Moriana for Abaddon, and only then at her urging did the new Warmaster launch his First Black Crusade in order to recover Drach'nyen.[4]

As the war between Abaddon and Daravek continued, the two soon met on the dead Craftworld Taial'shara and each brought with them several of their Warband's leaders. Before they began their negotiations though, Daravek suggested they hold a duel between two of their Warband leaders, which was customary when opposing Chaos Lords met with each other within the Eye of Terror. Abaddon once again agreed and selected Khayon, while Daravek selected the Iron Warriors Chaos Lord Ulrech Ansontyn.[1c]

During the duel between their champions, Daravek gloated to Abaddon about how his Warband had invaded the Black Legion's worlds and slaughtered the forces they had left to defend them. This enraged Khayon and he defeated Ulrech in a frenzy of attacks. He did not kill the Iron Warrior though and instead offered Ulrech a place within the Black Legion, but when it looked like Ulrech would accept the offer Daravek decapitated him. This caused Khayon to attack the Chaos Lord, but to the shock of everyone Daravek used his psychic powers to completely dominate the Sorcerer and forced the Ezekarion to kneel before him. He then laughed and told a dismayed Khayon, that he had defeated the Black Legion Sorcerer during the battle of Drol Kheir and then had bound Khayon's spirit to him before making the Sorcerer forget their encounter. Before further conflict could break out between the two groups though, the Warp Ghost Saronos suddenly appeared and deescalated the situation. When both groups confronted him, Saronos offered them a deal: He could lead one of the Warbands out of the Eye of Terror, but would only do so to the Chaos Lord whose offerings met the Warp Ghosts' price. Saronos refused to detail what exactly the Warp Ghosts wanted, but though Daravek offered them ships, slaves and many of the things he possessed, it was Abaddon who won the deal; when he simply told Saronos, the Warp Ghosts could take what they needed from him. An enraged Daravek threatened Saronos, but returned to his fleet as the Warp Ghost left with Abaddon's group to the Black Legion's flagship the Vengeful Spirit. The Death Guard Chaos Lord then watched on, as Abaddon's fleet entered the Warp and escaped from the Eye of Terror.[4]

Despite this set back though, Daravek still had a psychic connection with Khayon and he used this to guide Legion Host's fleet out of the Eye of Terror as well. When they neared the Cadian Gate, they found Abaddon's fleet engaged in battle with the Black Templars Chapter and quickly fell upon the Black Legion's ships. Now trapped between two foes, Khayon, who was acting in Abaddon's stead aboard the Vengeful Spirit, ordered the Black Legion's fleet to break through the Black Templars blockade and escape into the Warp. Khayon then ordered the Vengeful Spirit to attack Daravek's fleet, in an attempt to goad the Chaos Lord into invading the Black Legion's flagship[1g]. Daravek did not hesitate to do so and led a massive boarding attack on the Vengeful Spirit and personally killed many of its defenders. Before he could reach its bridge however, he was confronted by Khayon and the two fought each other - though this time his attempt to psychically dominate the Sorcerer failed. Khayon had prepared himself for their encounter and had finally realized how Daravek had been able to dominate him. It was not Khayon's soul that Daravek had bound to him, but Khayon's past Daemon familiar Gyre; which had previously been destroyed in battle with a clone of the Primarch Horus. After Gyre had been sent back into the Warp, Daravek had secretly summoned it and bound it to him, which forced the Daemon to turn upon Khayon, though it still had a psychic connection to the Black Legion Sorcerer. It was this connection that had allowed Daravek to have a hold on Khayon, but with Gyre drawn out from the Chaos Lord, that advantage was at an end. Without this hold on the Sorcerer, Daravek was easily overwhelmed by Khayon and was then decapitated by the Sorcerer.[4]

Khayon encountered Ahriman on at least two occasions after the Rubric, reversed in time for each of them. He returned to Prospero as Ahriman was seeking to use its link to Sortiarius to bypass his banishment, saying he had come to honour a debt yet in Ahriman's future.[3a] Khayon's ship fired the first shot in the Third Battle of Prospero,[3b] buying Ahriman the time he needed to complete his ritual on the surface.[3c]

Later, in the 7th Black Crusade, he fought alongside Abaddon and Telemachon Lyras and nearly destroyed the Blood Angels Chapter on the planet Mackan.[1]

In the last days of the 41st millennium, Khayon surrendered himself to the Inquisition to tell them his tale. Blinded, shackled, and deprived of his sixth sense, he was invited to confess his sins.[2a] He was to be the Herald of the Crimson Path, Abaddon's Thirteenth Black Crusade, confident that nothing he told them could change the Imperium's fate.[2k]

Khayon was a psyker powerful enough to survive the Rubric, capable of tearing holes in reality using a force weapon which could be used to teleport himself or others.[2h] He carried a deck of leatherbound tarot cards containing bound daemons, including the Ragged Knight.[2c]

Between the battles of Prospero and Harmony he carried Saern ('truth' in several Fenrisian dialects) - a power axe decorated with a golden wolf's head and runes telling the saga of Eyarik Born-of-Fire, which Khayon had turned into a force weapon by threading the haft with black, psychically-attuned crystals from a world within the Eye.[2f] After Saern was shattered by Worldbreaker, Chariz Terenoch forged the sword Sacramentum for Khayon.[4a]