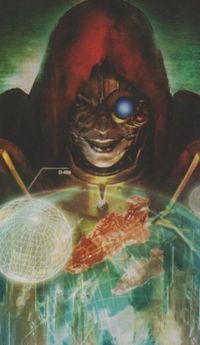 Istvaanism is a Radical faction of the Inquisition.

To this ideology, conflict is desirable to further progress through strife. It holds that mankind has made its greatest achievements after periods of conflict, such as the Horus Heresy, or Age of Apostasy. It is the place of the Istvaanians to strengthen mankind through adversity, and so follow a 'survival of the fittest' doctrine. The philosophy is named after the Isstvan III virus-bombings that initiated the Horus Heresy.[1]

The chief concern of Istvaanian Inquisitors is engendering and managing vital conflict. Though all conflict of any type interests them, raw warfare on a massive scale is what concerns them the most. The Istvaanians hold Sebastian Thor in particularly high regard, for his sweeping reforms were made possible only due to the bloodshed of the Age of Apostasy.[2]

Istvaanians' interventions are always a matter of judgement and wisdom, as above all they wish to strengthen the Imperium, not destroy it. It is those who are perceived as weak in their eyes that are the most likely to be subjected to their attentions. While some would not strike at a world or sector already at war, others take a grander view and see that war and its outcome in the context of the wider area, or even weigh a conflict's outcome against wars and threats yet to be. They may see a sector or army grown complacent on victory as easy prey for the foes of the future and better purged now; the chaff weeded out from the strong wheat, rather than destroyed utterly later.[2]

The methods Istvaanians use to create conflict vary from subtle to wild and indiscriminate. Many Istvaanians believe that conflict and aggression are mankind's natural state and that a nudge in the right direction will create all the bloody conflicts that could be desired. By fanning the natural resentment of a populace, working on the paranoia of a Planetary Governor, and introducing a fog of disinformation, an Istvaanian and his agents can create a a devastating revolt. Others will create phantom threats whose power of terror grows with every whispered conversation and whose existence demands a response. Some abstain from such subtlety and simply start a war when they feel the cause is sufficient. A notorious tactic of Istvaanians is to first strike one side and leave evidence implicating the other. This in turn creates a counterattack, and before long, an all-out war will have sprung from nowhere.[2]

Due to their beliefs, Istvaanians are denounced by the greater Inquisition and many Inquisitors look upon them with horror, giving them the derisive nickname "warmongers". They are only a small percentage of the Inquisition.[2]