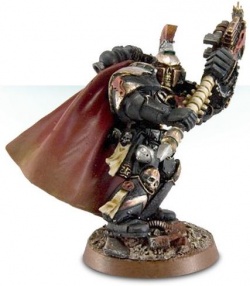 The gaunt, brooding Ivanus Enkomi was the eyes and voice of his Chapter at the Loyalist councils of war during the Badab War. Although the Minotaurs played a key part in the war, they remained largely aloof and distant from their allies as was the Chapter's wont, letting their blood reputation and brutal victories speak for them. Enkomi was judged by many to be a paradox, at once a natural observer whose stern gaze missed little and whose crimson-tattooed face and red-irised eyes spoke of an origin on some distant and feral world, but whose voice, although rarely employed, betrayed extraordinary intelligence and a capacity for fiery oratory that rivaled the greatest demagogues of the Ecclesiarchy in potency and skill.[1]

Chaplain Enkomi was also a skilled tactical commander as befitted one of his rank and title, who led his forces from the front in battle, exhorting them to ever greater heights of hatred and destruction against the God-Emperor's foes. In addition to his role as emissary between his chapter and the Loyalist high command, Chaplain Enkomi was at the forefront of the Minotaurs' attack in several key battles of the Badab War. Most notably he led a victorious boarding assault against the Lamenters' strike cruiser Dawn Reaper during the cataclysmic Battle of Optera, and commanding his Chapter's forces during the attack on Shaprias in the Maelstrom which foiled the Tyrant of Badab's dark machinations on that world and further uncovered the extent of the Astral Claws' sins and blasphemies.[1]

During the harrowing of the renegade Night Reapers Chapter, Enkomi took part in the Battle of Gathetris, where his Crozius Arcanum was shattered by a blow from a thunder hammer. He went on to act as a major Minotaurs commander during the Orphean War.[2]

Enkomi carries the Crozius Arkanos, replacing his Auxiliary Grenade Launcher and broken Crozius Arcanum, as well as a Power Fist. In addition to his Rosarius and ornate Power Armour, he also utilizes a Jump Pack. Due to the number of boarding actions which took place during the Badab War, Enkomi sometimes traded his power armour and jump pack for a suit of void-hardened power armour.[2]