Inquisitor Ivixia Dannica seen with her Servo-skull autogun mounted on her shoulder, The Power Halberd of Saint Josmane and her Purity armour

Ivixia Dannica is a famous member of the Ordo Malleus.

Recruited from one of the Schola Progenia on Alena-Mora, Ivixia Dannica was the daughter of a prominent Imperial Guard Colonel whose regiment had been seconded to service with Inquisitor Grainne of the Ordo Hereticus during his examinations into the Cardinal of Alena-Mora during the Sargossa Schism.

The lengthy nature of this examination ended with armed-quarantine for the Cardinal's followers, and persecution of the Cardinal himself. Colonel Dannica’s regiment were granted feudal rights over the ashes of the cardinal's world, after the Cardinal was punished for his apostate teachings. Ivixia, being the most faithful in her devotions to the Emperor and the Ecclesiarchy of all her fellow pupils, learned the dangers of apostasy and the solemn duty of an Imperial servant, that not even death could end, at her father’s knee. When she learned of the executed Cardinal and his wickedness, the righteous loathing of all things heretical and evil burned fiercely within her. Many believed she would take her vows and become a member of one of the militant orders of the Adepta Sororitas. But this was soon to change.

On Ivixia's eighteenth birthday, a robed figure with an Inquisitorial Rosette appeared at the gate of the family estates and demanded to see the young girl. The Colonel was not one to disobey such a symbol. Throwing back his hood, the newcomer revealed himself to be Inquisitor Covenant, led to this place by the divination of his mystics and readings of the Emperor's Tarot which showed that Ivixia would make an ideal recruit for his retinue. Covenant began subjecting her to a lengthy series of ordeals to prove her spiritual purity and physical suitability, which she passed with ease, but as she continued with the tests, an act of base treachery reaching back to the examination of Inquisitor Grainne was to come to fruition. It appears that the roots of heresy run deep and it is rightly said that the weed of corruption can fester even in the purest soil. There had been those who had escaped the initial purges of Colonel Dannica's regiment and had clandestinely continued following the teachings of the planet's former ruler.

A network of daemon-worshipping cults who had existed under the teachings of the Cardinal, had been slowly gathering their power until such time as they were ready to avenge their master and regain control of their world. As Ivixia's tests continued, infernal pacts were formed, blood sacrifices were made to the Ruinous Powers and effigies of Colonel Dannica were burned in sacrificial lames for the sole reason of eliminating the one man on Alena-Mora who symbolised their defeat and whom they held responsible for the death of their leader.

As the colonel and his family attended the regimental ball, a daemon from the darkest regions of the Warp manifested in a blazing pyre of blood, slaughtering the guests in a frenzy of bloodletting. All who were present fled, but Inquisitor Covenant and Colonel Dannica stood against its might. Highly-skilled in the mystical arts of the Daemonhunter, Covenant was able to hold the daemon at bay, but not before it eradicated the colonel with a sweep of its warp-forged blade. The colonel’s body burst into flames, immolating in a heartbeat until nothing but his charred skull remained. At the sight of her father’s murder, Ivixia screamed at the daemon and the power of her words staggered the daemon for the briefest instant. It was all the opening Covenant needed, and he was able to destroy the daemon's form and send it back from whence it came.

The Servo-skull autogun of Inquisitor Ivixia Dannica, modified from her father's skull

In the aftermath of the massacre, Inquisitor Covenant led the purges of the cults with Ivixia at his side, convinced more than ever that Ivixia was the right choice for his acolyte. During this purge, hundreds were put to death as Covenant and Ivixia hunted down those responsible for her father's death.

Six months to the day following her father's death, Inquisitor Covenant left Alena-Mora with Ivixia Dannica as his latest Acolyte. Recalling the teachings of her father, Ivixia had his skull modified by the lexmechanics of Inquisitor Covenant and turned into a weapon-carrying servo-skull autogun. Now her father would remain with her wherever she went and could continue to serve the Emperor beyond death.

Together Covenant and Ivixia traveled around the southern rim of the galaxy, stamping out many blasphemous sects dedicated to the worship of daemons and other warp-spawned abominations. Together with a disreputable type who claimed to be a Duke, they defeated the hedonistic priesthood of the Decagogue of Panetha Varn and prevented the manifestation of the Daemon Prince Urgolath the Rancid on Saneriax IV. Ivixia learned from her master at an astounding rate, taking on her mentor's puritanical firebrand attitude, brooking no corruption or laxity in her investigations.

Soon there was nothing more Covenant could teach her and she successfully petitioned the Conclaves of the Ordos Tempestus for her ascension to full inquisitor.

The Banishing of Slaanesh

On Cimmaru Majoris she led a force of inducted Guardsmen against the primitive idol-worshipping tribes of the western continent, declaring them Daemonicus Frateris, and personally tore down the vulgar and profane totem poles at the centre of each village. As her crusade continued, the tribes fought back with great ferocity, taking to the mountains and launching brutal hit-and-run attacks on Ivixia’s forces. But axes and javelins are no match for lasers and tanks and eventually the tribes were driven back to a valley sacred to their people and began a conjuration that would summon the greatest of their gods. This was a creature said to be composed of mist that could not be harmed and had the power to kill a man with a glance. A the height of the battle, a scarlet mist poured from the mouth of the tribe's greatest champion and a glittering being that rippled with iridescent colours erupted from his body. Amid the ruin of his flesh, a bull-headed daemon of Slaanesh was born in the heart of the Imperial troopers. The slaughter was terrible and hundreds of men were killed as they laid down their weapons before this terrible, yet daemonically alluring beast.

But Ivixia had foreseen such an event and had a plan in place to defeat any such manifestations. Having already unearthed the truth of what the tribes were worshipping, Ivixia had requested the aid of the Grey Knights. Activating a teleport homer, she called down a squad of Grey Knight Terminators who waited in orbit for just such a moment. Together with rallied squads of Imperial Guardsmen, they destroyed the daemon and wiped the last remnants of its followers from the face of Cimmaru Majoris. Their lands were declared Purgatus and sown with blessed salt that they might not give rise to anything for a hundred years. With the success of the Cimmaru Majoris campaign behind her, Ivixia returned to the galactic core, destroying many blasphemous daemonic creatures on many different worlds.

On Prenau she joined the defence of the Basilica Dominastrus and saved the sisters of the Orders Hospitaller who dwelt there. She also tracked down the instigators of the attack and recovered the shards of Saint Josmane's armour, one of the Basilica’s most holy relics, which had been stolen in the first days of the battle. In recognition of this deed, the Ecclesiarchy ordered that fragments should be shorn from the armour and incorporated into a holy weapon to be crafted in her honour. As word of her bravery and purity spread, Ivixia was honoured on Ophelia IV with a blessed suit of armour for her efforts in defending the realms of the Emperor from the taint of the daemonic and heretical. Her strength of purpose and chaste piety attracted many followers along the way and all were of the highest purity, as Ivixia would tolerate nothing less than the same standards she applied to herself in her followers.

One such follower she discovered on the world of Karis Cephalon, while on the trail of Inquisitors she believed were harbouring and making use of daemonhosts. She discovered a diminutive, solitary individual known as Jeremiah sheltering in the mutant ghettos of this troubled world. Shunned even by the mutants of Karis Cephalon, it soon became apparent to Ivixia that Jeremiah was an outcast, known in some circles as a Blank, soulless and loathed by all. But as a consequence of this, Jeremiah was a potent defence against psychic powers and thus a hugely valuable addition to a Daemonhunter's retinue. Despite his reluctance, Jeremiah knew that refusal was not an option and accompanied Ivixia in her pursuit of the fallen inquisitors.

Ivixia just missed one such Inquisitor at the forge-mine complex of Taberna Ostium and arrived just too late to apprehend another in the blazing ruins of Paganus Reach. The bullet-riddled remains of the town indicated that a fierce battle had occurred here and upon returning to Cephalon, she was to learn that the fearsome figure of Witch Hunter Tyrus had apprehended her prey at Paganus Reach. Marching to the Witch Hunter's lodgings, she demanded that Tyrus hand the traitor over to the Ordo Malleus. Naturally, Tyrus refused, stating that the heretic Kessel would burn in the fires of purgation, but that one blasphemer had escaped his holy clutches. Furious at Tyrus's refusal to hand over a consorter with daemons, she attacked his warband, but was given a sharp lesson in why Tyrus is such a feared individual throughout the galaxy. Realising that violence was not the way forward, she again approached Tyrus, this time in the spirit of cooperation, and learned that the escaped rogue Inquisitor did indeed traffic with daemons and make use of dangerous psychic powers. The Ordo Malleus reserves a special hatred for those of their order who cross the line into daemonancy, and none more so than Ivixia. Setting off on the trail of this escaped rogue, Ivixia and her retinue departed Karis Cephalon, the name of the traitor on their lips: Lichtenstein. 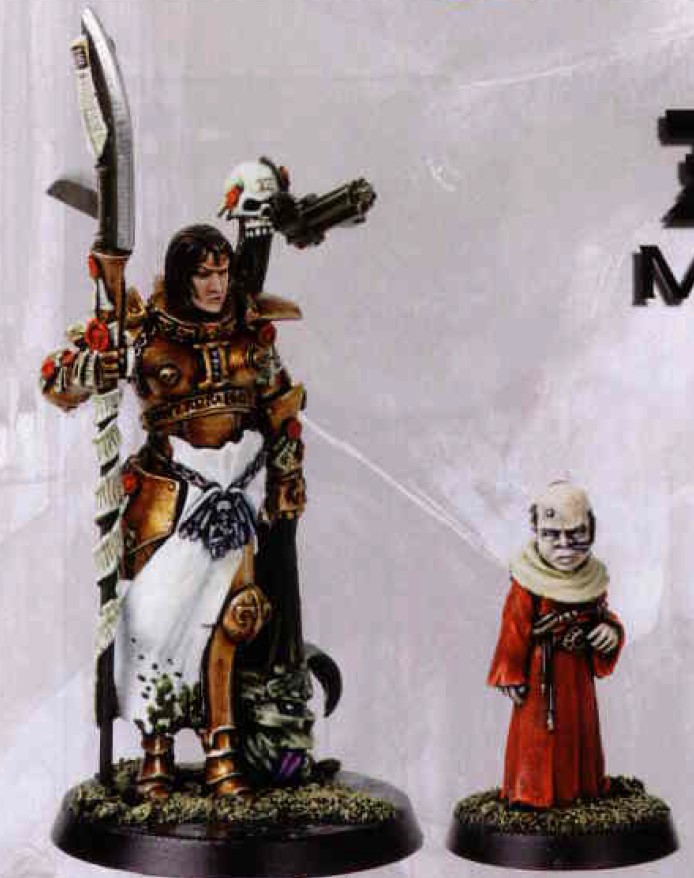