Iyanden is an Eldar Craftworld. Once the most populated and largest of the Craftworlds, it is now on the brink of extinction after being invaded by Hive Fleet Kraken. Iyanden barely repelled the attack, losing thousands upon thousands of Eldar warriors in the process. With so few remaining, Iyanden must now rely heavily on Wraith-constructs inhabited by the spirits of their dead, such as Wraithlords and Wraithguard, to form the backbone of its armies. Hence, the people of Iyanden are often referred to as the "Ghost Warriors". Despite suffering such a significant loss, the Eldar of Iyanden are determined that their Craftworld will shine brightly once again.[1b]

Following the Fall of the Eldar, those Eldar remaining on Iyanden immediately felt Slaanesh thirsting for their souls, and the Craftworld's Seer Council immediately ordered the recovery of Waystones from Crone Worlds as well the construction of an Infinity Circuit, restricting the Dark Prince's ability to claim their souls upon death. With their small victory in hand, Iyanden began a loftier goal of rebuilding a new realm that would one day rule the Galaxy as the Eldar Empire had once done. However, many Craftworlds such as Alaitoc and Ulthwé took other missions and would spare no resources for this quest, but Biel-tan proved willing to join Iyanden and the two Craftworlds became inseparable allies for many years with the common goal of not only rebuilding Eldar civilization but also defeating Chaos. Together, Iyanden and Biel-Tan scored many victories against the forces of Chaos.[6c]

The Farseers of Iyanden focused entirely on predicting the machinations of Chaos, blinding them to much else that occurred within the galaxy. In time, the Exodite Worlds of the Ybaric Cluster joined Iyanden's cause, bringing with them many thousands of Dragon Knights. However, when it became clear that Biel-Tan fought not to defeat Chaos but to bring to heel all those who they deem as in the way of Eldar ascension, tensions between the two Craftworlds flared. While the alliance was never officially dissolved, joint operations between the two Craftworlds became rarer and rarer until one day communications ceased altogether. Iyanden lost yet another ally when the Ybaric Cluster Exodites became isolated by a Warp Storm, and attempts to investigate their fate by Iyanden resulted in none of the scouts returning.[6c] 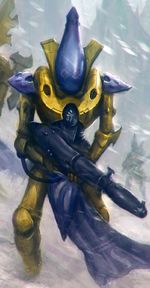 Now alone, Iyanden's accomplishments began to dwindle and it became clear they had underestimated just how ingrained Chaos had become in younger races like Humanity. Iyanden soon came into battle with Zhemon, a Fallen Angel Space Marine who was spreading an empire of anarchy across the galaxy in an act of vengeance against his former Imperial masters. Faced with Zhemon's significant forces and their own dwindling numbers, it was here that Iyanden first used Spiritseers to call upon the souls of deceased Eldar to pilot Wraith-constructs. Despite these reinforcements, victory was still uncertain for the Eldar despite how many Chaos-tainted worlds they purged, they had underestimated how widespread Zhemon's own followers had become. Fortunately, the Imperium itself eventually became involved, and Iyanden indirectly aided the humans by attacking his power base on pivotal worlds, weakening his own defenses in the face of eventual Imperial assault.[6c]

By 478.M37, Zhemon was finally cornered by Iyanden on the world of Ishasta and this was the only time in the entire campaign that the Eldar fought directly at the side of the Imperium when their forces fought alongside the Dark Angels who were determined to capture their fallen brother. A joint attack by Iyanden's wraith constructs and the Ravenwing cornered Zhemon, his bodyguards, and his pack of Maulerfiends. Battle finally ended when Zhemon was taken prisoner by the Dark Angels. Iyanden agreed to let the Imperials have their prize, for they foresaw that the Fallen Angel would suffer far more in the hands of Dark Angels than their own.[1] Swayed by the Iyanden success against Zhemon, two lesser Craftworlds (Malan'tai and Idharae) joined their cause. Together, the three Craftworlds greatly curbed the activity of Chaos on the Eastern Fringe.[6c]

Eventually it was not the forces of Chaos that threatened the Craftworlds the most, but that of the Tyranid Hive Fleet Naga. In 810.M41 to 812.M41, Iyanden helped to eliminate one of the two main tendrils of Hive Fleet Naga.[2a] As the Tyranids were besieging Iyanden's old Exodite comrades in the Ybaric Cluster, Iyanden, Malan'tai, and Idharae struck to defend their allies and many Maiden Worlds.[6c]

On the Exodite World of Halathel, defenders fiercely held their World Spirit shrine from a Tyranid siege. A fresh fleet from Iyanden commanded by Admiral Draech arrived to aid the Exodites and engaged the Hive Ships orbiting the planet. Draech's flagship, the Auspicious Illumination of Eternity was destroyed early in the battle. Command of the fleet was quickly seized by his second-in-command, a young Prince Yriel, who successfully led the Iyanden fleet to victory. However, on the planet the shrine was overrun. In less than an hour the Eldar defenders were massacred and the World Spirit destroyed. Yriel, overwhelmed by rage, gave the order to scour all life from Halathel.[2a]

Despite their victory, eventually Malan'tai was destroyed by the abomination known as the Doom of Malan'tai. However, Iyanden emerged from the conflict relatively unscathed, and in their arrogance did not believe the warnings of Idharae Chief Farseer Taolis Eversong that the Tyranids encountered thus far were merely the harbingers of a larger swarm. Thus it was that Idharae ended their alliance with Iyanden after their warning had fallen on deaf ears. Not all of Iyanden's seers were oblivious to the threat; Kelmon Firesight, leader of Iyanden's Seer Council, had become concerned by the Tyranid menace and supported Prince Yriel during his campaign against Argan Kallorax. Kelmon never told anyone why he supported the rise of Yriel, simply that he foresaw the Prince would be pivotal to the Craftworld's future.[6c]

Iyanden heeded Yriel's and Kelmon's advice and deployed its full force against Argan Kallorax. However, in his desire to throw everything he had at his enemy, Yriel foolishly stripped Iyanden of all of its defense ships during the Battle of the Burning Moon, leaving the Craftworld virtually defenseless when a Chaos Cruiser of Kallorax's defeated fleet launched 36 Cyclonic Torpedoes at Iyanden as a final act of defiance. Though Iyanden's point defense lasers intercepted 35 of the Torpedoes, one still struck and killed tens of thousands of Eldar along with their Spirit Stones, dooming them to the torments of Slaanesh. In the aftermath of the disaster, an embattled Yriel left Iyanden.[6c] 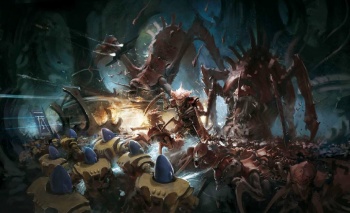 In 992.M41[4], Iyanden suffered its greatest tragedy at the claws of Hive Fleet Kraken. In the end Iyanden was victorious, but only narrowly. After the conflict, Iyanden stood in ruins and four-fifths of its inhabitants were dead or dying.[2b]

Later, a remnant of Kraken thought lost to a Warp Storm emerged once more and apparently attempted to fuse with Hive Fleet Leviathan, but it was defeated by the combined forces of Iyanden, Biel-tan, and Dark Eldar in the Battle of Duriel.[3]

In 995.M41, another invasion of Iyanden, this time by Waaagh! Rekkfist, was imminent and so Iyanden preemptively engaged the Orks. Early battles successfully crippled the Waaagh!, but soon the Orks counter-attacked in force and managed to land on the Craftworld. Iyanden was forced to awaken even more Wraith-constructs in order to hold back the invasion. As events became desperate, a Webway portal at the rear of the Craftworld activated and Dark Eldar from the Kabal of the Wraithkind and the Cult of the Flayed Hand emerged to aid in slaying the Orks. After Iyanden was saved, the Council of Seers questioned the Dark Eldar as to why they intervened, and they replied simply that they gain extreme entertainment from watching Iyanden's angst-ridden use of necromancy.[3]

A Clash of Fates

In 827999.M41, the Farseers of Iyanden become aware of two possible futures in which their Craftworld is destroyed. The first is at the hands of the Daemon Prince M'kar the Reborn, the second by the Ultramarines. Thus do the Eldar begin a series of campaigns designed to bring these two enemies into direct conflict, sparing Iyanden from destruction. Through a series of hit and run engagements, M'kar's daemonic forces are lured ever closer to Ultramar and when the Daemon Prince is about to descend on the Ultramar world of Talassar, the Eldar withdraw and let M'kar's hatred of the Ultramarines do the rest.[6a]

During the Thirteenth Black Crusade, Iyanden was assailed by Nurgle-infested Space Hulks led by the Daemon Prince Gara'gugul'gor. The Craftworld was only saved thanks to the efforts of Yvraine and her Ynnari and the sacrifice of Yriel. In the aftermath, Iyanden allied itself with Yvraine, who resurrected Yriel with one of the Crone Swords.[7] 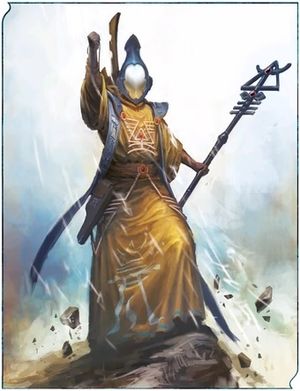 Shortly after Iyanden's first Daemonic invasion, a celestial event known as the Noctis Aeterna erupted across the Galaxy with the formation of the Great Rift. Taking advantage of the situation, the Keeper of Secrets N'Kisha channeled a Warp Storm to break through the craftworld’s formidable protections. Once more, fighting took place beneath the domes and among the splendours of that majestic craftworld. Were it not for the sudden appearance of warhosts from all the Eldar factions – craftworlds, Dark Eldar, Corsairs, Harlequins, Exodites and Ynnari – then all would have been lost.[8]

Following the narrow survival of Iyanden and the teachings of Yvraine, debate raged among Iyanden's Seer Council as to what course of action should be done. Farseer Iyanna Arienal had her own hypothesis, crossing the entire Craftworld's population into death in order to escape the depredations of Slaanesh and empower the birth of Ynnead to destroy Chaos God. Not only that, Arienal proposed having the entire Craftworld Eldar race convert itself into Ghost Warriors. Arienal argued that once the threat of Slaanesh had passed, the Dark Eldar's Haemonculi could be used to regrow their physical bodies and reverse the process. However the danger was great, for should Iyanden fall Slaanesh would have a feast of Eldar souls like none save The Fall itself. Thus Iyanden's Seers continue to debate a course of action as they neared towards Iathglas, a site of a grand confluence of fate.[9]

The symbol of Iyanden is a reference to the ever-burning shrine of Asuryan to signify a flame of hope that Iyanden will one day recover.[1b]

As the dead begin to become all too prevalent on Iyanden, the remains of ancient Eldar noble houses have formed Ghost Houses populated by the souls of the departed in Wraith-constructs.[3]