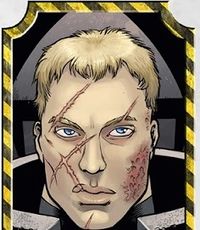 Izrafel is a Sanguinary Priest in the Flesh Tearers Chapter who currently serves in the Deathwatch as part of the Watch Station Xyston's Kill-Team led by Dienekas Agathon. His Kill-Teams know him as being hot-blooded and a merciless barbarian in battle, yet for all his bloodthirst and savagery Izrafel still has an Angel's honour. Currently his Kill-Team had just destroyed a minor Ur-Ghul infestation on the mining moon Siora, when an Ork Kroozer crashed near their location. Afterwards, Agathon told his Kill-Team they would need to send a warning to Xyston, about the Kroozer's appearance on the moon.[1]